The death of Queen Elizabeth II has caused the Premier League to postpone the weekend’s matches, but it is not the first time a Liverpool match has been called off after a royal death.

A decision was made on Friday to postpone the weekend’s matches as a show of “respect” to the Queen, who served the UK for 70 years.

The Premier League made the decision autonomously, one we haven’t seen in football for some time when it comes to deaths in the royal family.

It’s unprecedented, but it’s new to a whole generation of fans and gamers.

The last monarch to pass before the queen was King George VI, but what happened to football in 1952 and then when Princess Diana died in 1997?

Did football stop after the death of the King?

The answer is no.

King George VI passed away on February 6, 1952, a Wednesday, and four games were played that night as part of the fourth round of the FA Cup.

It’s not unlike Man United and West Ham playing their European games on English soil on Thursday night, just hours after the Queen’s death was confirmed.

But while the Premier League has opted to postpone this weekend’s games, back in 1952 the First Division went ahead as planned.

For Liverpool, that meant traveling to the Derby just three days after King George VI died, with Don Welsh leading the club to a 1-1 draw.

Tributes were paid and a note in the Derby day program read: “The passing of King George has prompted a worldwide tribute to his memory. 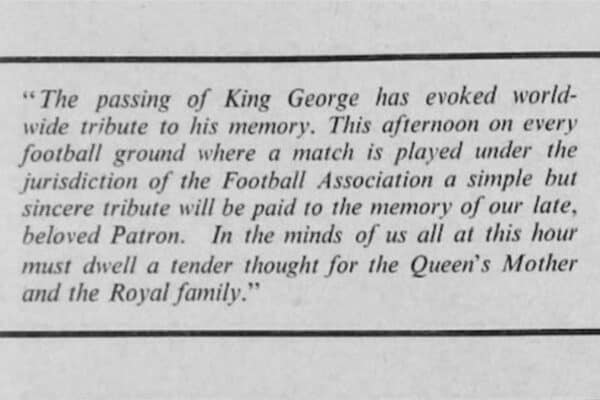 “This afternoon in all the football fields where a match is played under the jurisdiction of the Football Association, a simple but sincere tribute will be paid to the memory of our late and beloved Patron.

“A tender thought must be on the minds of all of us at this time for the Queen Mother and the Royal Family.”

All the contrast with today.

As for the King’s funeral, it was a Friday but the First Division matches took place normally the following day, February 16, 1952.

What happened after the death of Princess Diana? 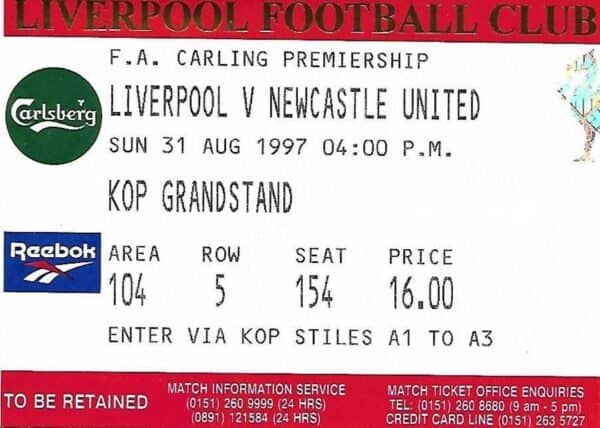 It was matchday five of the 1997/98 season when news of Princess Diana’s death broke, with only Liverpool and Newcastle scheduled to play on Sunday 31 August 1997.

Eight games were played the previous Saturday and it was expected that Liverpool vs. Newcastle were to continue at 4pm on Sunday but were postponed just hours before kick-off in light of the news.

It was a delayed action even though Diana’s death was confirmed in the early hours of the morning, but Sky ran a 45-minute broadcast from Anfield.

The game was rescheduled for 20 January 1998, with Michael Owen scoring the only goal of the game to inflict defeat on Kenny Dalglish’s Newcastle.

There was another game that was not played after news of Princess Diana’s passing broke, but Bolton vs. Everton took place as scheduled on Monday 1 September 1997, with a minute’s silence before kick-off.

So we’ve seen two different reactions in football after a royal death, but the Queen’s passing has set a different precedent.