It was probably not the first time that football had been accused of being “out of popular sentiment”. It certainly wasn’t the last.

It was February 1952 and Britain was mourning the death of King George VI. Shops and factories closed, along with cinemas and theaters, as the country came to a standstill. The BBC canceled all programs other than solemn news bulletins and essential maritime forecasts.

Most sporting events were also postponed, including a rugby match between England and Ireland.

FA secretary Stanley Rous sent a letter to all clubs, proposing that playing the matches scheduled for that weekend would offer the opportunity to pay tribute with a performance of Abide With Me, followed by a minute’s silence and the anthem national. Rous said it would be “a simple but sincere tribute (…) to the memory of our late beloved patron.”

Inevitably, some were offended.

A crawl through the archives reveals a letter written to The Times that week by Mr. H. M. Gordon Clark of London, who complained that “while rugby, football, racing, hunting, courses and many other sports remain respectfully silent in the face of the nation’s pain, football clubs are advised to be content with displaying merely external signs of pain.” 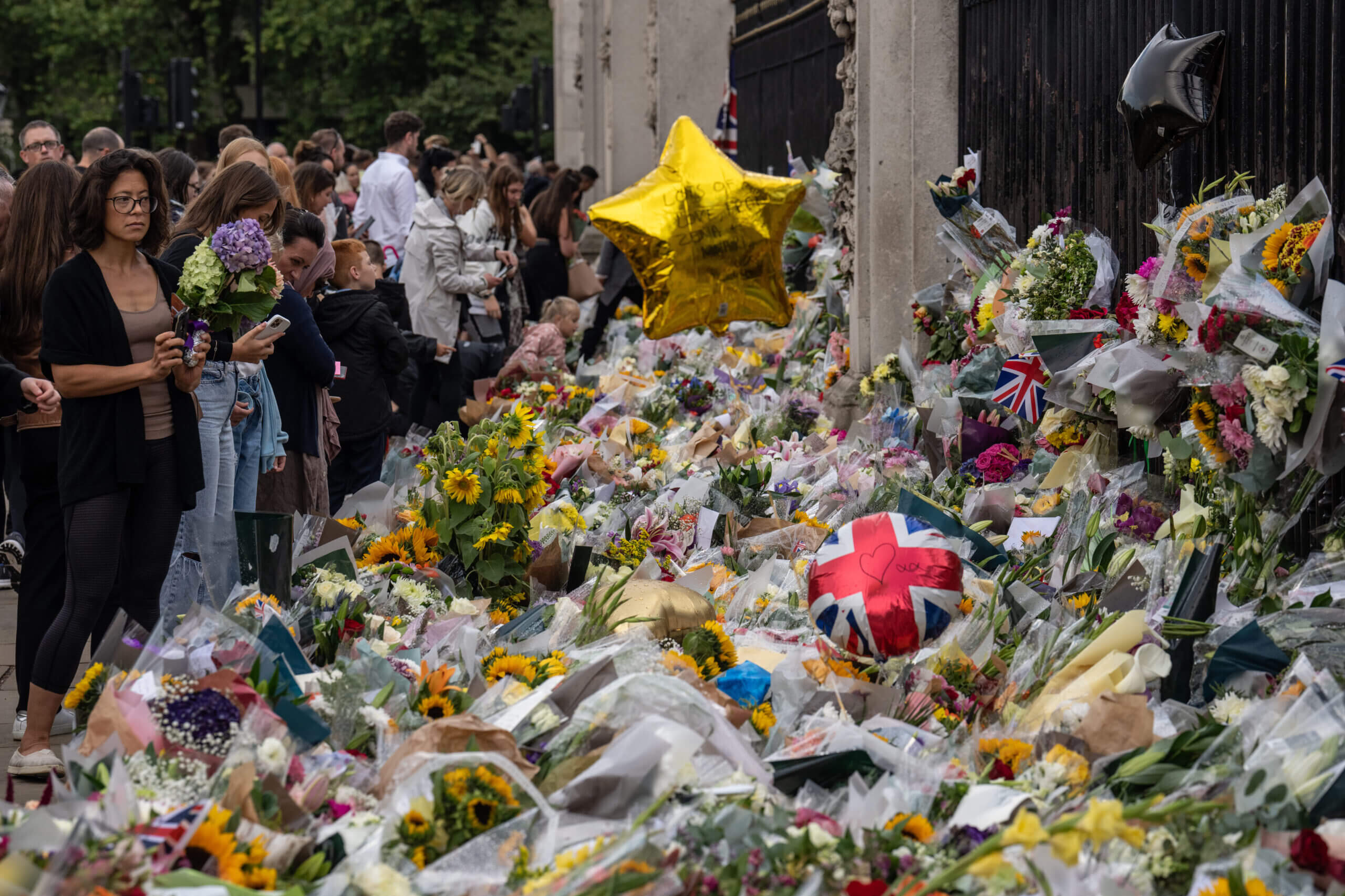 Clark went further, expressing his hope that “loyal citizens themselves would censor such conduct by staying away … and thus show the purveyors of their entertainment how out of touch they are with popular sentiment.”

Football continued, respecting in its own way.

The most eye-catching league game that weekend was the North London derby in which Arsenal beat Tottenham Hotspur 2-1, but it says something about the era in which The Times led its sports coverage with a report from the Wimbledon victory over Corinthian Casuals in the third. round of the FA Amateur Cup — “an uninspiring match in which skill played a poor secondary role to enthusiasm”, preceded by “an impressive minute of silence (…) in a simple tribute to a king who had so loved the game ”.

Seven decades after Queen Elizabeth II’s death on Thursday, UK shops will be open today, theatrical performances continuing (with preparations made for theaters to dim their lights for two minutes at 7pm each night as a show of respect) and even this weekend’s rugby matches continue, as does the Great North Run half marathon which raises admirable amounts of money for charities and other good causes.

The opening of the cricket test match between England and South Africa at The Oval in south London has been postponed on Friday, but the game will start on Saturday, with a minute’s silence and players and officials wearing black armbands.

The British Horseracing Authority announced that all meetings on Friday and Saturday would also be postponed out of respect for the late Queen and her “unique and enduring affinity and bond” with the sport, but meetings (and tributes) will take out on Sunday.

But football has stagnated. All matches scheduled for this weekend in England, Scotland, Wales and Northern Ireland have been called off out of respect.

Following the publication of the National Duel Guide and consultation with the Government, other sports and Rugby League stakeholders, including clubs, the RFL can confirm that matches at all levels will take place this weekend. week.

This is not just a Premier League decision. This is the whole game, down to the grassroots level, where, to use one example, volunteers in South London have expressed dismay at the need to cancel a junior tournament involving 30 teams and over 600 youngsters.

It’s a curious situation and while there will be a variety of opinions about it, one personal opinion is that the football authorities got it wrong.

Not because it adds to the growing problem of party congestion at the highest level, but simply because if a national mood can be discerned at the moment, the “stop all clocks” approach seems to be at odds with it.

As the Football Supporters Association (FSA) said in a statement on Friday afternoon: “We believe that football is at its best when it brings people together at times of great national importance, whether they are times of joy or times of mourning. Our opinion, which we share with the football authorities, is that most fans would have liked to go to matches this weekend and pay their respects to the Queen together with their fellow fans.”

The FSF acknowledged that “there was no perfect decision” that could be made by the soccer authorities; they know better than anyone that their members are a diverse group with different points of view not only on this topic but on the broader question of the monarchy. But, as he added, “many fans will feel this was a missed opportunity for football to pay its own special tributes.”

That is precisely what the game did 70 years ago, playing and paying homage to George VI in its own way.

And that makes it even more strange to go the other way now, at a time when society and sport seem more comfortable with the approach that was taken on football then.

On the one hand, they feel like they would have been criticized no matter what decision they made, and they’re probably right. On the other, they point out that the Queen was patron of the FA and her grandson William is its president. The EFL statement referred to football as “the national sport”, implying that this conferred a greater sense of duty.

However, it is strange. The “national sport” part is difficult to reconcile when we weigh the difference between a test match of cricket in which England take on South Africa, a Commonwealth nation, and a series of club-level football matches that are local issues played at a broader level. world television audience.

Is football thinking too much about this?

the athleticJack Pitt-Brooke of ‘s wondered on Twitter if gaming authorities might be demonstrating “a bit of self-flagellation instinct, a ‘Can’t you see we’re playing’ kind of thing.” ‘How dare we try to continue as normal?’

Trying to think how football has done this so poorly and so out of step with the national mood. Is there a bit of self-flagellation instinct within football here? “You can’t see us playing in” type stuff. “How dare we try to continue as normal?” It is almost ascetic.

That sounds good, as if football is so desperate to be seen to be doing the right thing that it fights to see what is right. Or maybe you’re just terrified your product and brand will be trashed by the sort of newspaper columnist or radio presenter who would be quick to call the Premier League a national DISGRACE for continuing as normal (never stopping to question your own decision). to do the same).

There are so many practical questions for those affected by this weekend’s postponements: fans who have booked their trip (particularly those from abroad) and those who won’t be able to do so on a rearranged date; casual workers who are increasingly reliant on their match-day income as the cost-of-living crisis worsens.

There are also obvious questions about accessory congestion.

In this of all seasons, with the Premier League suspended between mid-November and December 26 to make room for the World Cup final in Qatar, the loss of a full weekend’s match schedule ( and quite possibly a second one a week from now, coinciding with the Queen’s funeral) will wreak havoc. For the 10 British clubs participating in all three European competitions, the calendar already looked very packed.

That doesn’t seem to have been a consideration here.

Nor should it have been.

When it comes to a matter of respect, it should be a matter of principle rather than convenience. Reluctantly to have continued, on the grounds that a congested match schedule left them no choice, would have been a mistake.

But playing in the way that UK sports like cricket, rugby union (both union and league) and ice hockey will do today, and even the Queen’s beloved horse racing tomorrow, seems right. .

If society continued as normal, from shops to factories to theaters, you may have imagined that football would be comfortable doing the same.

It felt like an opportunity. We got a glimpse of that in West Ham United’s Europa Conference League match against Romanian visitors FCSB on Thursday night, just an hour after the announcement of his death, as the minute’s silence before the match was preceded by an interpretation Spontaneous from God Save The Queen. and a burst of applause.

Not all fans in England, or even Scotland, Wales and Northern Ireland, claim to rival West Ham’s when it comes to realistic sentiment, but that was a powerful and significant show of respect.

It could have been widely replicated this weekend, hundreds of thousands of people, from one end of the UK to the other, gathering to pay tribute to Elizabeth II just as football fans were invited to pay their respects to their father 70 years earlier. . .