A viral Facebook post claims that the Harry Potter movies are coming to Netflix. However, is it going to happen? Well, probably not if you’re in an English-speaking country.

The Harry Potter movies are loved around the world, adapting the famous books by JK Rowling. As a hot commodity, streaming rights to Harry Potter are hard to come by and only come when Warner Bros. gives it to Netflix worldwide.

The Facebook page in question is Netflix Memes, created in May 2018. They largely do what their name suggests and post memes, but they also post links to news (mainly Fanside’s NetflixLife under an affiliate scheme) and post news in the form of memes. .

On August 29, they posted an image of Harry Potter covers that read, “Harry Potter is FINALLY on Netflix,” stating that all eight movies will arrive on September 1.

The post has gained over 100k likes and over 34k shares. Another post (believed to be from the same network of Facebook Pages) has over 30k likes. 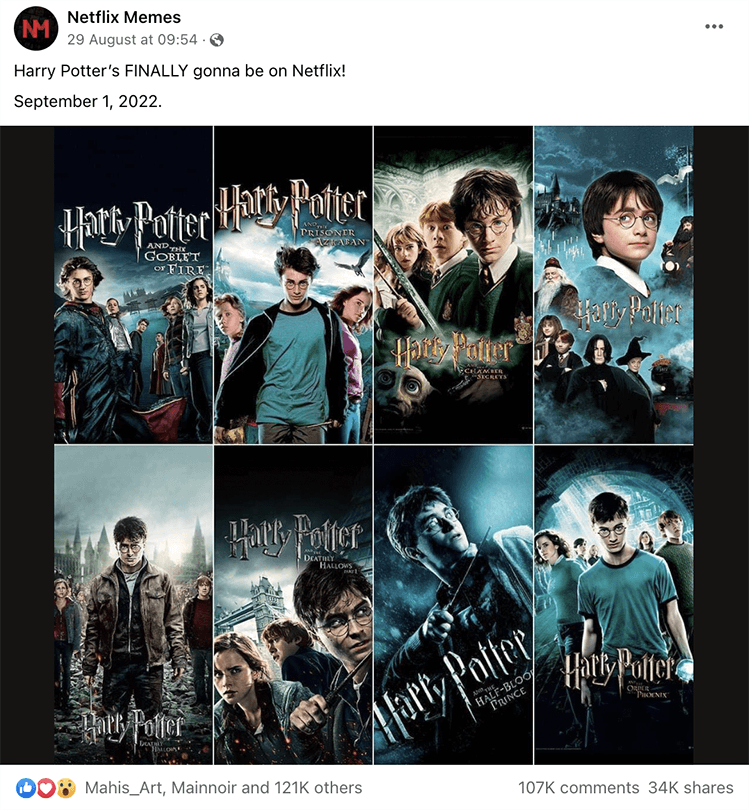 Sadly though, this isn’t true as movies don’t make it to Netflix in places like the UK, Canada, or the US. Schedules for those regions have been out for several weeks and Harry Potter is nowhere to be seen.

The rights are locked up in the US with Peacock and HBO Max. They are exclusively available to stream on Sky’s NOW service in the UK.

However, it is true for some regions. Netflix will receive the films in the Middle East on September 1, but beyond those regions, Netflix as a whole will not be taking over Harry Potter.

The last time the Harry Potter collection was available on Netflix in a primarily English-speaking country was in 2019 and 2020, but then they’re gone.

See also  Descendants: Netflix documentary talks with the descendants of the last slave ship that trafficked Africans to the US, the Clotilda

Beyond the Middle East, which is about to be the recipient of the films, only two other Netflix regions are carrying the films: Turkey (which received all eight films in June of this year) and Belgium (which received them earlier this year). of August). 2022).

This is not the first time we have walked this path before. In late 2020, a viral post claimed the same thing that was later debunked. The same thing happened two years earlier than in 2018 as well.

Would you like the Harry Potter movies to be on Netflix? Let us know in the comments below.