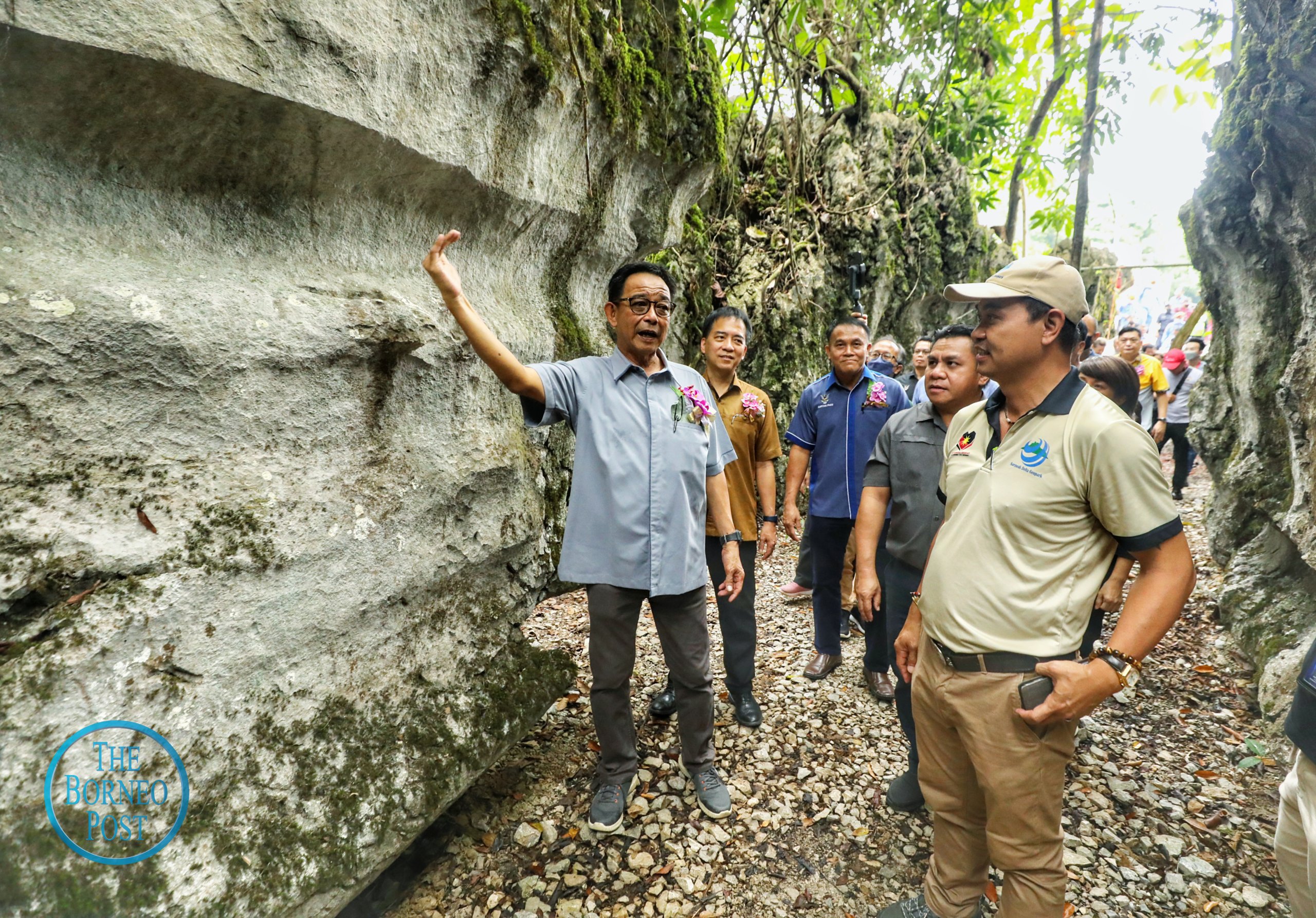 Abdul Karim (left) walks through the Paku rock maze garden. Miro is on the second on the right.

KUCHING (Sep 2): Tourism officials and stakeholders should work with local communities and allow them to take a bigger role in protecting and developing their areas into tourist attractions, Dato Sri Abdul Karim Rahman Hamzah said.

The Minister for Tourism, Creative Industry and Performing Arts said that to revitalize any host community and rural destination, effective partnership and community empowerment are absolutely essential.

“Well-designed capacity building programs are therefore of vital importance in rejuvenating many local destinations, especially those in the suburbs or rural areas,” he said today at the grand opening of the Paku Rock Maze Garden in Bau near here.

He said the Paku Rock Maze Garden is an example where community partnership and involvement is in action and should be emulated in other rural destinations.

According to him, before Paku Rock Maze Garden was discovered and developed in late 2021, it was simply an undeveloped primeval stone forest with overgrown bushes behind a Chinese temple.

“Although it is located on the roadside of Jalan Kuching-Bau, no one really knew what was there except the local community. Even if you were to use Google Maps to zoom in on the area, you wouldn’t see much as it was all covered in trees.

“When I was told about this place a few months ago, I decided to see it for myself one day. I’m glad to be here today,” he said.

Abdul Karim said he was impressed that the development was not just for the garden itself or to gain more visitors to generate more revenue.

He said that responsible tourism initiatives are at the core of all development and that environmental, social and economic aspects are emphasized.

“Decisions are made with the community at center stage. Facilities and infrastructures are gradually improved to connect visitors with local businesses,” she said.

Based on the names recorded in the guestbook, Abdul Karim said that about 5,000 people visited the Paku Rock Maze Garden in June and July this year.

He believed that more than 10,000 people could have visited the garden since not all of them registered.

“Whatever the actual number is, this is a remarkable achievement,” he said.

According to a biologist and geologist after a tour of the rock garden on August 25, the geological formation appears to have Late Jurassic to Cretaceous origins and has yet to be studied in detail.

“The formation is mostly limestone and represents an ancient marine ecosystem that was later located inland with the retreat of the coast. Erosion features suggest rivers, possibly flowing through a cave system.

“Extensive groves on the cave walls suggest that various levels of water persisted. The roof of the cave system appears to have collapsed, forming a limestone scree vegetation. This landscape is known elsewhere to be rich in biodiversity.

“Groups of animals and plants particularly restricted to habitats such as endemic hotspots include aroids, orchids, land snails, crabs, and lizards. The next logical step to understand the landscape would be geological and geomorphological studies, as well as biological inventories of these specific groups of species”.