The seven-time F1 world champion was involved in a crash with Alpine’s Alonso as the pair battled for position at Les Combes.

Hamilton suffered a sudden loss of water pressure after he took off and landed in the run-off area with a heavy blow. Hamilton was subsequently told by Mercedes to pull over and pull over shortly after the incident.

The impact also triggered the FIA ​​medical warning signal requiring a visit to the medical center, and Hamilton received a warning from the stewards after initially refusing to go.

As previously reported, its power unit was later returned to the Mercedes HPP facility in Brixworth, where it is still undergoing examination. The V6 engine was new for the Belgian GP weekend and if it can no longer be used, then Hamilton will have to take a fourth example and thus a grid penalty at an upcoming race.

The gearbox mount was cracked and the internals are also under examination.

“It was a big, big shock,” Mercedes director of motorsport strategy James Vowles said in a team video. “It was measured at 45G on the car’s SDR recorder, which is very large with a vertical load.

“He will be fine, he will fight again in Zandvoort. I think mainly because of him he is frustrated, frustrated because he had a very fast racing car and it was possible to get on the podium, but he, like all of us, is here to fight and keep moving forward. 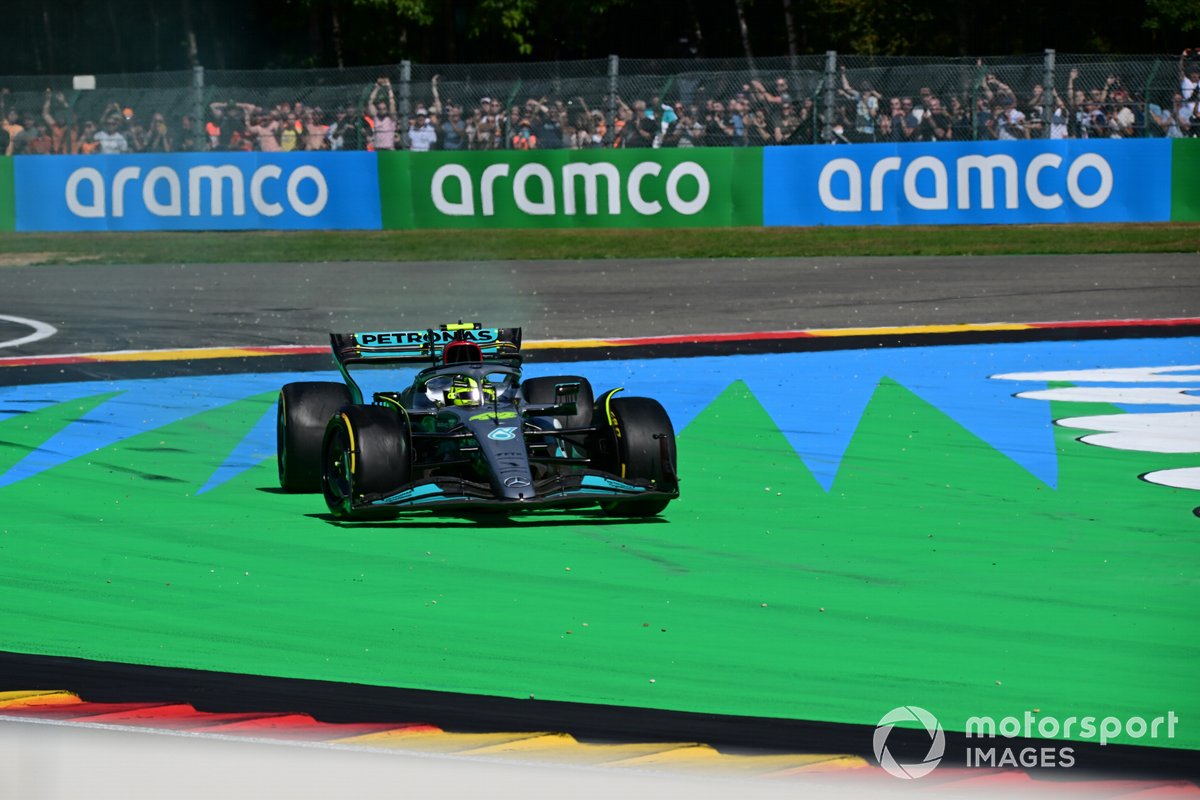 Lewis Hamilton, Mercedes W13, cuts through a corner after contact with Fernando Alonso, Alpine A522

Vowles noted that in addition to the PU and gearbox, other elements of the car are being reviewed.

“There are enough photos floating around the internet to show how high up the car was and how it landed and the impact was big.

“What we noticed almost immediately after impact with the ground was a loss of coolant. In fact, you can see on Alonso’s board that the coolant actually went flying at him, and then you started to see the temperatures go up quite quickly and that was the main reason for stopping him on track.

“It will now take a few days to go through all the components, clearly there will be overloads on the suspension and gearbox components and we need to make sure we understand the full scope of what is required before Zandvoort.”

Vowles also acknowledged that Mercedes matched Ferrari’s race pace in Belgium having been second in qualifying.

“I think the approach and philosophy of what you’re doing in terms of prioritizing race pace or qualifying pace could be different between the two teams,” he said.

“Obviously the numbers are large, they are much vaster than what we normally see, I would normally expect a tenth or two, not a second.

“What I can say is that we are beating them in degradation in the race. So some of this could be due to how the tires are used and the performance of the car, some of this is degradation.

“And the bias we have is to add points race after race. Clearly, although we need to improve our qualifying position because it’s not just relative to Ferrari, we’re also racing in a McLaren and Alpine qualifying condition as well.

“And to be at the front, to get our first win this season, we have to make sure that qualifying improves from where it is and that’s the focus that hasn’t just been in this race, we’ve been looking at it throughout the season, and will continue to do so.”