The penultimate race weekend of the 2022 Fanatec GT World Challenge America season powered by AWS heads to central Florida for two races on the famous 3.74-mile stretch of asphalt from the former military base at Sebring International Raceway. The notoriously bumpy circuit is a real challenge for both rider and machine to set the stage for the final rounds of the 2022 season.

Heading into the weekend, the fight to follow will be Florida native Racers Edge Motorsports against outsiders Wright Motorsports and CrowdStrike with Riley Motorsports. The trio are in an epic three-way battle for the top spot in the Pro-Am championship. They are no strangers to this track either: Wright took the Pro-Am victory in Race 1 in 2021 in his Porsche, while Racers Edge won in Race 2 in his Acura. This time, they will have to compete with eight other Pro-Am teams if they want to repeat their success.

When all global SRO events combined are summed up, we are now 35 races in an incredible 49-race series, where manufacturer points are racked up at the best race tracks in Europe, America, Australia and Asia. Heading to Sebring, Mercedes-AMG leads Audi Sport and Ferrari.

K-PAX Racing understands the high-speed Sebring circuit, having swept the weekend here in 2021 with Jordan Pepper and Andrea Caldarelli at the wheel of the No. 3 Lamborghini. This year the duo is split, with Caldarelli and Michele Beretta driving the No. 1 Lamborghini Huracan GT3, and Pepper teaming up with Misha Goikhberg in the No. 3 Lamborghini Huracan GT3. This could mean some feuds brewing within the team as they work to completely extinguish the hopes of any other teams in the 2022 championship. But as we all know, and have been reminded this season (especially at Watkins Glen): It’s not over until it’s over.

After a bit of bad luck in Race 1 at Road America, the No. 96 Turner Motorsport BMW M4 GT3 (Michael Dinan/Robby Foley) will return to ensure that no victory is too easy, as will the newcomers at the end of the season, Conquest Racing with their No. 34 Ferrari 488 GT3 (Manny Franco/Alessandro Balzan). 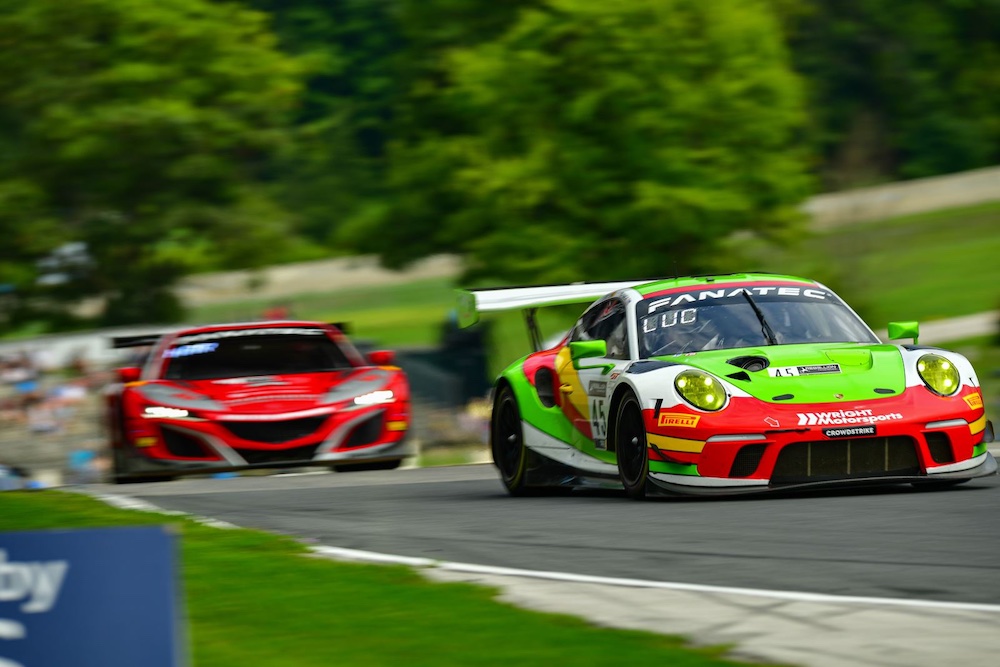 This class has not only been the most populated class of the Fanatec GT World Challenge America season, but it has also been the most dramatic. Nowhere is that more evident than in the points held by the top three teams in the championship so far: Jan Heylen and Charlie Luck of No. 45 Wright Motorsport lead over Ashton Harrison and Mario Farnbacher of No. 93 drivers. of Racers Edge Motorsports, and the No. 04. Crowdstrike Racing of George Kurtz and Colin Braun of Riley Motorsports, with just four points separating first from third. Either team could drop Sebring as the points leader, but the championship won’t be decided until the end of the 8-hour season at Indy.

Wright earned both of his race wins in the opening rounds at Sonoma, while CrowdStrike has three wins at three different tracks. The Racers Edge team may have the momentum that they just swept through the weekend of Road America.

Following close behind in fourth and fifth are the No. 94 BimmerWorld BMW M4 GT3 (Chandler Hull/Bill Auberlen) and the No. 63 DXDT Racing Mercedes-AMG GT3 (David Askew/Dirk Muller).

This will be an open battle for race wins and championship points. The high-speed straights at Sebring may favor the big-block Mercedes V8 over its turbocharged six-cylinder rivals from Acura and BMW. but Sebring also features some terribly technical sections. That’s the beauty of Fanatec GT World Challenge America: the wide variety of manufacturers, chassis and power plants ensures some of the most exciting professional sports car racing in North America.

The No. 23 Triarsi Competizione Ferrari 488 GT3 driven by Onofrio Triarsi and Charlie Scardina has already claimed the Am championship with eight wins from ten races.

Triarsi has done an incredible job this season, claiming some finishing positions well ahead of their Pro-Am rivals, and not far behind its No. 13 Ferrari 488 GT3 Pro-Am sister car of Justin Wetherill and Ryan Dalziel. In fact, they finished just behind the No. 13 in Race 2 at Watkins Glen.

The Sebring schedule, live times and scores and session reports will be available at GT-World-Challenge-America.com.