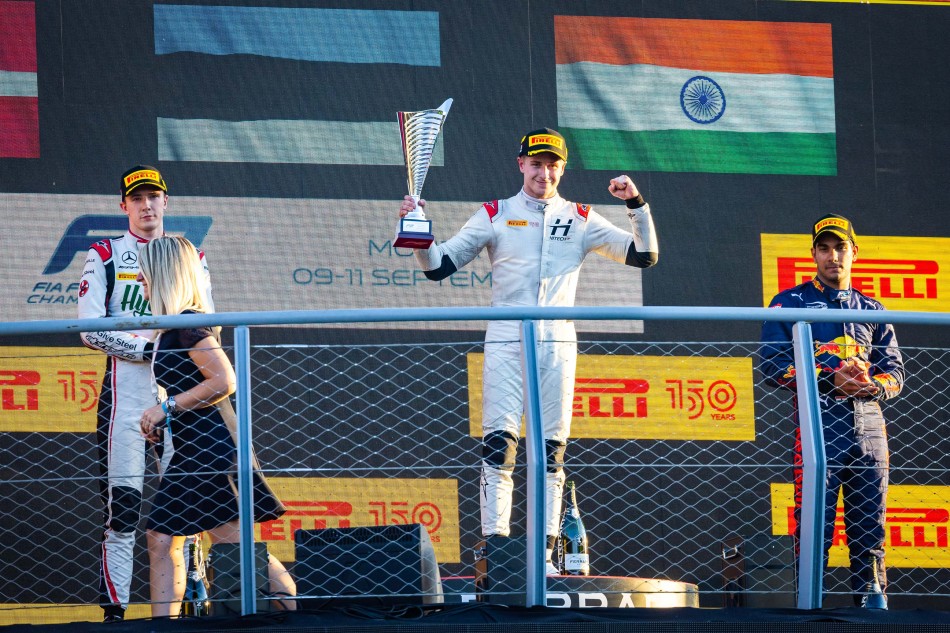 Felipe Drugovich secured the FIA ​​Formula 2 Drivers’ Championship at Monza despite being forced to watch from the side after going off on the first lap. Jüri Vips took his first win of the season, proving that overtaking was more than possible at the Temple of Speed, victorious from third on the grid.

Drugovich had to watch Théo Pourchaire’s attempts to deny him the title but, unfortunately for the ART Grand Prix driver, the race did not go as expected, allowing the MP Motorsport driver to become 2022 FIA Formula 2 Champion with three races to go.

Frederik Vesti kept his cool under pressure to hold on to second after losing the lead to Vips, while Jehan Daruvala fought his way up from fifth to put his PREMA Racing car on the podium. After losing at the line, Logan Sargeant found his way back to fourth, while Richard Verschoor gave Trident something to smile about in his home race in fifth.

Liam Lawson overcame several duels in the evening for sixth place, ahead of Jack Doohan and David Beckmann, who claimed the last point on offer in eighth place. 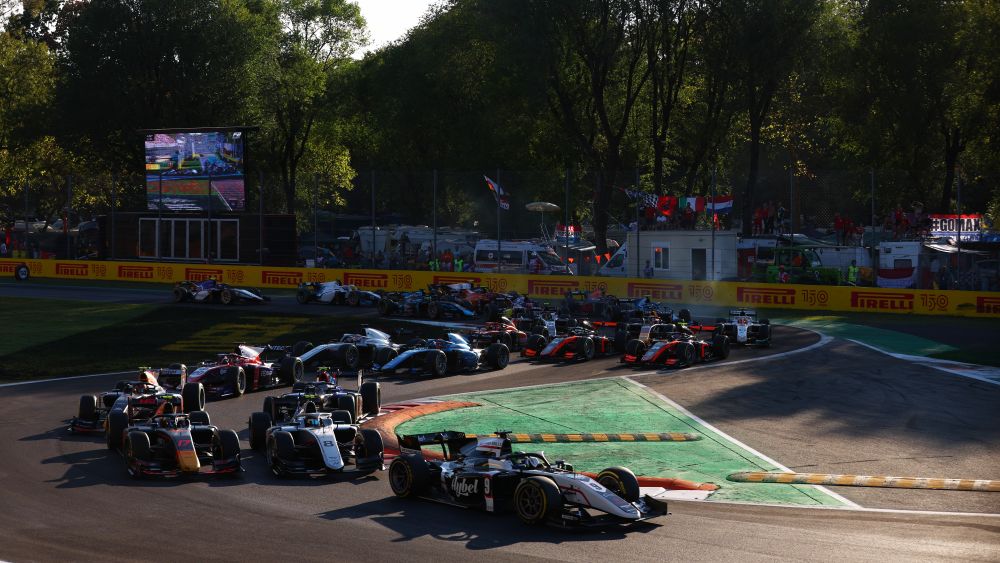 The stage was set for another exciting Sprint Race, with a golden hour of evening sun fluttering through the trees surrounding Monza. Seeking his first return to the podium since Le Castellet Feature Race, Vesti lined up on reverse grid pole with fellow rookie Sargeant on the front row.

Meanwhile, a post-qualifying penalty for setting his best time under single-flying yellow flags meant championship leader Drugovich would start from P12, two places ahead of nearest rival Pourchaire. The MP Motorsport driver knew that if he kept things clean and kept the Frenchman behind him, the title would be his with three races to spare.

As all five lights went out, Vesti timed his breakaway perfectly to hold the lead into the opening chicane. It wasn’t such a strong start for Sargeant, who got stuck on the line, allowing Vips, Iwasa and Daruvala to get ahead of the American driver. Further back, Tatiana Calderón and Olli Caldwell got tangled up at Turn 1, prompting an early safety car appearance.

Drugovich’s day was turned upside down from the starting line, as the Brazilian driver couldn’t even make it to the end of a dramatic first lap. After attempting to pass Amaury Cordeel on the outside of Turn 5, the two made contact and the Brazilian found himself running into the gravel with broken suspension. As the orange MP Motorsport car pitted, Pourchaire’s onslaught continued, with the Brazilian watching events unfold on the pit wall. 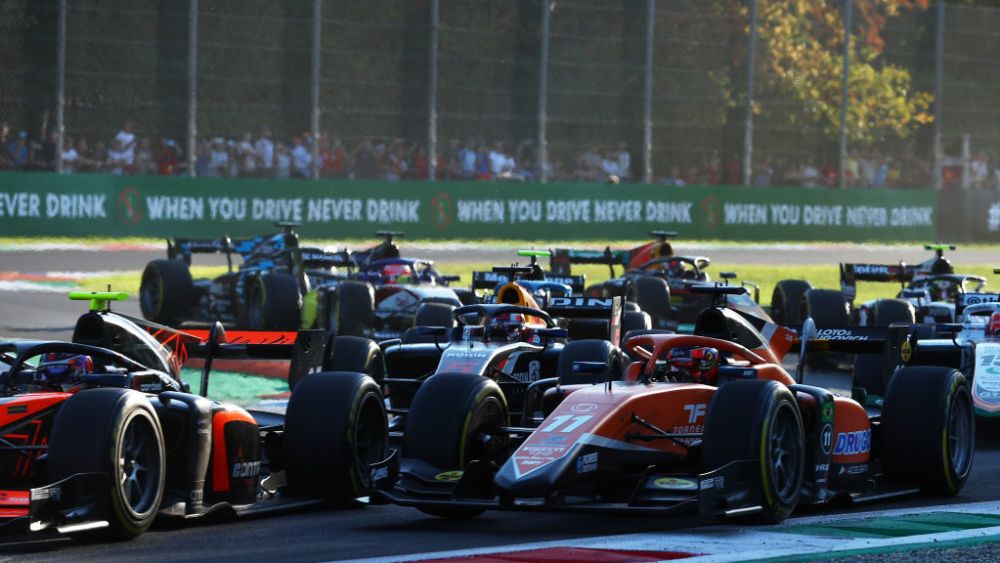 Attempting to break the trailer on the restart three laps later, Vesti sent him late on the brakes to Parabolica, but Vips dropped him even later to charge around the inside of Turn 1 and seize the lead from the ART driver. The Estonian broke free of the Dane’s clutches to leave Vesti behind, heading for a DRS train.

The drivers were jamming the horns up and down the order, with the Van Amersfoort Racing duo tangling with Lawson. The Carlin driver dueled neck and neck with Beckmann for ninth place, allowing Cordeel to close in, but the Belgian rider had Pourchaire peering into the mirrors of him. Knowing that time was of the essence, the black and white ART car swooped in to take 11th place.

Having lost a car out of the race, MP Motorsport soon had its second retirement. Making contact with Campos Racing’s Ralph Boschung, Clément Novalak damaged his front wing at the exact same chicane where Drugovich’s race ended earlier.

In the fight at the front of the field, Daruvala returned the favor to Sargeant to retake fourth place after losing it on the restart. However, it was Armstrong and Verschoor who were getting a run for their money. Wheel to wheel through Parabolica, the pair hit wheels at Turn 2 before the Trident driver finally made it to sixth place on Lap 12, but it was clear the Kiwi was not going to let this fight go.

With a queue forming behind him, it was clear Iwasa was fighting to hold on to third place, and it wasn’t long before Daruvala, Sargeant and fellow Red Bull junior Verschoor dispatched him in relatively quick succession.

The title fight was turned upside down once again, when the Pourchaire fight was dealt a fatal blow. Battling Hauger to hold on to P11, the ART car made a trip through the gravel on the exit of Turn 2 and sent it falling down the order to P16. 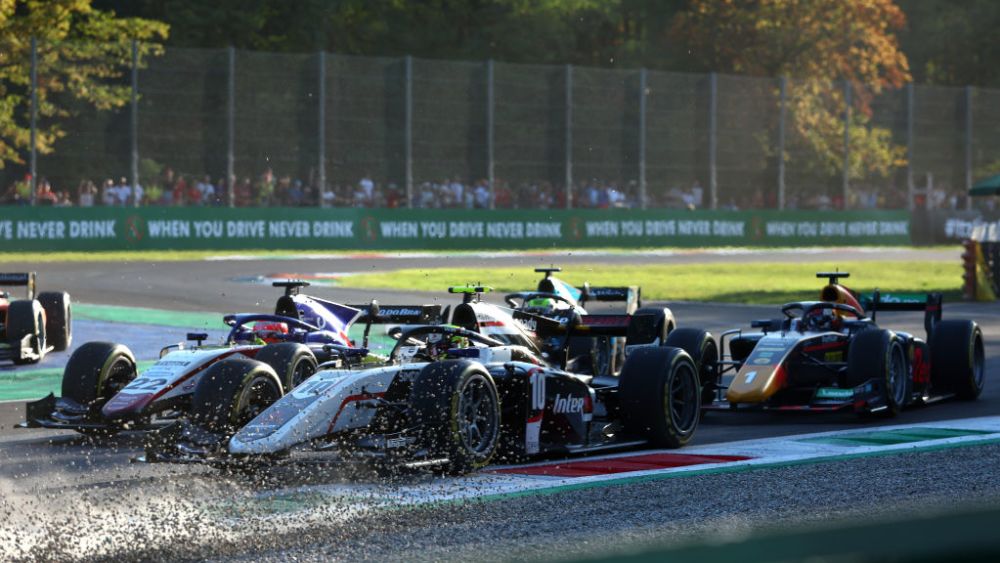 Trying to claim sixth place from Iwasa, Armstrong was forced to multitask, looking for a move on the Japanese driver while fending off Doohan behind. Once the Hitech had broken through, the Virtuosi Racing driver patiently waited for his turn, which came quickly as he zipped past Iwasa around turn 11. The DAMS driver’s descent continued as Lawson slammed on the brakes and he was sneaking into it from a long way back to start eighth.

With the race approaching its final three laps, it was time for Armstrong, Doohan and Lawson to battle it out for sixth place. Forcing the Hitech driver to go on the defensive at Turn 1, Doohan tried to apply the pressure as Armstrong crossed the run-off and held position. This left the door wide open for compatriot Lawson to make the most of it, nailing his exit from the chicane to overtake the Alpine Academy Driver for seventh at Turn 4.

Despite the unfolding chaos behind, Vips seemed calm up front, comfortably out of DRS range for Vesti behind. Although the ART driver pressed his tires at the end to try to catch up with the silver Hitech, he was powerless to prevent the Estonian from taking a comfortable first win of his 2022 campaign as Daruvala returned to the podium.

Then all eyes turned to the MP pit wall as the checkered flag came out: Drugovich knew that, despite his retirement, he had done enough to take the title in dominant fashion and celebrations broke out in the Dutch team. .

Sargeant stayed out of trouble to take fourth place ahead of Verschoor, Lawson, Doohan and Beckmann, who rounded out the top eight point scorers. Armstrong had crossed the finish line in sixth place, but was handed a five-second penalty for going off track and gaining a lasting lead, demoting him to 10th. 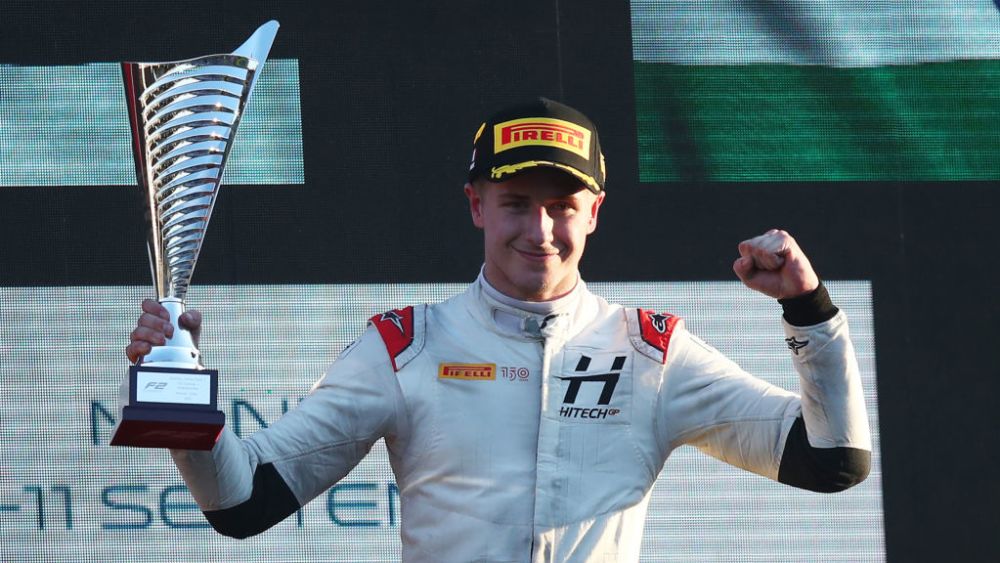 “Really happy to get the win today to maximize the weekend so far after a poor qualifying yesterday we stuck with the yellows at the end. I had a good day today, got ahead at the start, then controlled an easy race since then to be honest, no big drama and happy to get a win.”

THE VIEW OF THE CHAMPIONSHIP

With 233 points to his name, Drugovich has concluded the fight for the 2022 Drivers’ title with three races remaining. Sitting 69 points behind the Brazilian, Pourchaire’s attention will turn to maintaining second place as Logan Sargeant has a chance to close the 29-point gap in the feature race. Not far behind in fourth and fifth are Jack Doohan and Liam Lawson with 125 and 122 points respectively.

MP still holds the Team Championship lead with 269 points, however Vesti’s podium finish has allowed ART Grand Prix to close their lead to six points, with Carlin a further six points behind the French team. Hitech Grand Prix has strengthened its position of four by 200 points against PREMA Racing’s 197.

Jack Doohan will line up on pole when the penultimate feature race of the 2022 season begins on Sunday at 10:05 local time.