Emma Webster is not a landscape artist but a landscape painter. The differentiation is slight but significant, the nuance indicating that the British-American artist’s paintings are imaginative collages depicting her own ecosystems, separate from what we might see out the window.

Although recognizable forms abound (trees, caves, flowers), the final images are more like ethereal and haunting landscapes than realistic images of nature. Through his practice, he redefines painting as something that forges new relationships between the artist and the artwork, between the artwork and the viewer, between humans and their (un)natural environment.

A set of 11 new paintings exemplifies the Los Angeles-based artist’s approach to the medium. Each of the works, currently on view in Webster’s solo exhibition “Illuminarium,” at Perrotin’s new Seoul gallery in Dosan Park, presents a different fantastical scene, yet together they could be read as a progression tracing the creation of a landscape to its downfall and destruction. 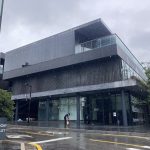 still in the crib (2022), for example, represents a clearing in a forest. Cool blue light illuminates the tips of nearby trees and a rock formation in the background, but the outskirts are left dark. Meanwhile, a small opening in the ground emits a warm amber glow. Looking at the piece gives one the feeling of being in the womb, before being exposed to the complexities of the shadowy world beyond. Later works pierce that sense of innocence.

Webster’s landscapes always draw the line between the real and the mysterious, reflecting the multi-step process by which they are formed. The artist begins each piece with sketches, which she then scans into a virtual reality program. There, she manipulates, exaggerates and transforms her images, turning them into 3D and developing what might be called digital landscape sculptures.

“I am not interested in virtual reality as an end, but as a means of exploratory sculpture”, explained the young artist in an interview with ARTnews. “My sketches are made up of a collage of inspirations: set design, landscape painting, travel photography, fantasy and other worldliness of screen space. VR becomes the place where I can meld these different things into one solid thought.”

Satisfied, Webster prints the scenes, making the digital physical again, and translates them into large-scale canvases in oil paint. It is a process rooted in tradition but shaped by technology, in a way not unlike how many go about their daily rituals right now.

The way the “Illuminarium” plays unfold seems to develop a loose narrative, almost like a playwright breaking up information into discrete scenes. In fact, Webster is interested in theater and sees parallels between lighting, scenery and painting. An earlier show at Stems Gallery in Brussels, titled “Ready the Lanterns,” found her starting point in lighting design and investigated the concept of nocturne, which is most commonly used to refer to musical compositions that suggest night. She wondered: What if “night” simply meant lack of sunlight? Her research opened the term to a broader meaning. Also, lighting design, like virtual reality, mimics sunlight, but never actually engages it. It is an artifice that aims to enhance reality itself, just as a stage offers its audience a gateway to another world.

“The stage is a proxy space: we are both in an auditorium and on the site of the play,” he said. “In these paintings, and in virtual reality, we are in two places at once: like a video game made to be populated by a player, the viewer becomes interactive.”

To see Webster’s works is to plunge into new worlds. Each is a space filled with natural yet distorted views, with wiry Dr. Seuss trees and wriggling orchids teeming with life, embellished supernatural phenomena, and gravity-defying landscapes.

His paintings are vividly haunting, pointing to both the beauty of the natural world and humanity’s destruction of it. Ultimately, landscapes are not in stasis, a fact Webster’s work continually reminds us of.

As Webster noted, “There is a sadness built into [to] trying to capture wildlife, when these places are changing and disappearing. We pigeonhole landscape painting as nice and boring, but there’s nothing nice about a climate in crisis.”