Michigan’s defense is coming off a big game against Colorado State, where it sacked quarterback Clay Millen seven times and also recorded 11 tackles for loss.

The Wolverines not only have a new defensive coordinator (Jesse Minter), but they’ve hired Mike Elston to be their defensive line coach. Elston previously trained at Notre Dame, where he achieved much success.

On Wednesday, Elston spoke to the media about the loss of Aidan Hutchinson and David Ojabo from the 2021 team. While he didn’t coach them last year, he knows the kind of production they brought to Michigan. The coach says that there are guys who can fill the role, but it will look different. It is more of a committee approach rather than two individuals.

Elston said he was pleased in Week 1. He said his unit played hard and physically. The defensive line coach commented on the rotation of players on and off. Elson said that he loves to do that to keep the guys cool. He believes production will increase when Michigan can rotate.

See also  Argentine coach Lionel Scaloni: 'Lionel Messi has shown that he is the best of all time'

“In the first game, what we felt we did well was play hard, run to the ball and play very physically up front, we did a very good job of destroying screens across the board,” Elston said. “Our substitutions, we rotate a lot of guys and when you do that, sometimes in the first game, you can have some mistakes and 10 guys on the field, 12 guys on the field. Our guys handled that very, very well. We had some units that stretched out a little bit and we were able to get four new guys together, five new guys, and I love doing that. I think that keeps the guys fresh. I think production goes up for guys that can go out there and know they’re going to play four or five snaps, and then when the momentum spreads, we can get them out.”

What’s scary is that Elson thinks his unit can take a big step in Week 2 against Hawaii. He wants to see them run to the ball with better effort and more consistent block destruction off the ball. If the Wolverines can keep moving forward, then this line is going to be pretty scary when it comes to playing Ohio State.

“Things we’d like to see as improvements in Week 2 for the front would be an even better effort running into football, we can improve there,” Elston said. “Although we did a great job in game one, we can make a big step in game two. More consistent block destruction and what we’re doing. Better Outs – I feel like as the game went on, we were more concerned with trying to see what they were doing and reading blocks, rather than just getting off the ball and taking guys down. So I would love to see an improvement in that area, up front.”

Elston said he’s learned there are a lot of guys out there who can play winning football. She said his goal now in Week 2 is to get the guys ready to play championship-level soccer. He reiterated that he loves to rotate players and see what his unit can do, but at the end of the day, his goal is to make Michigan have a championship-style defensive line.

“What we learned up front, we’ve got a lot of guys that can play winning football,” Elston said. “We rotate a lot of guys, and I think the next step as we go into game two, week 2, is that we’re trying to build guys that can play championship-level football. And when you go to the football field, you are expected to do that. Early on, you’re seeing what the guys can do and they’re out there and a lot of guys played very, very well. But you know, our goal is to play championship-level soccer as we go through the rest of the season.”

Michigan will host Hawaii this Saturday on the Big Ten Network at 8 pm EDT. 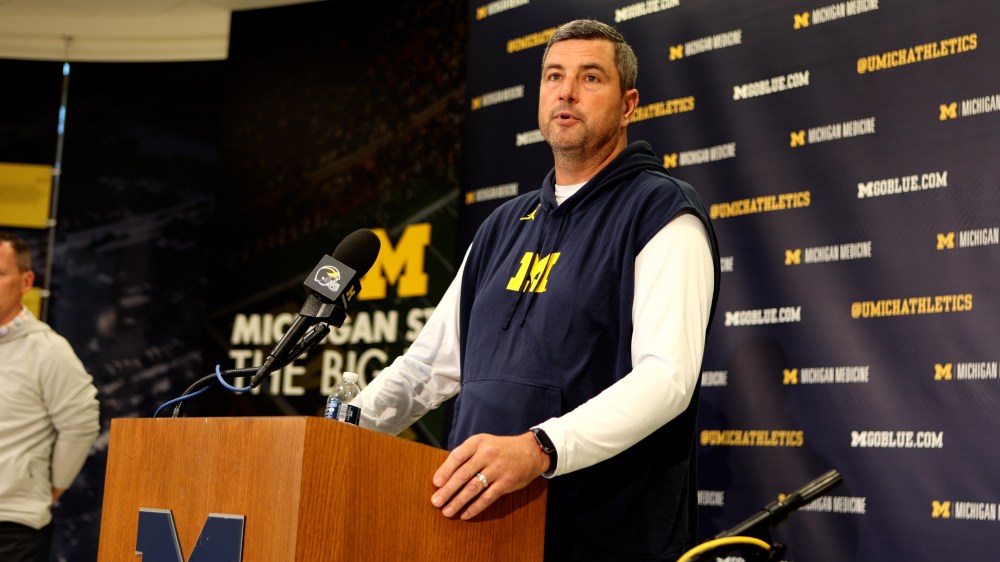