A lunar-themed luxury resort could be built in Dubai before the end of this decade, according to a report this week by Arabian Business. Canadian architecture firm Moon World Resorts Inc. is responsible for the design of this otherworldly resort.

Ambitious architectural projects are not unknown to Dubai. The iconic Burj Khalifa, currently the tallest structure in the world, will be surrounded by proposals for a suspended metropolis that is a testament to the city’s extravagant architecture. 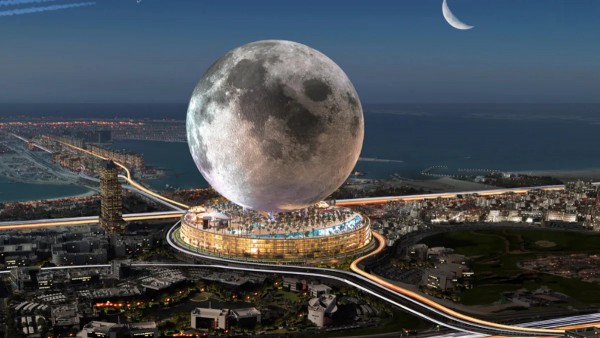 (Photo: Moon World Resorts)
Moon World Resorts Inc., a Canadian architecture firm and intellectual property licensor, claims that Dubai could have a $5 billion (AED18 billion) tourist destination this decade. The complex was suggested and co-founded by Sandra G. Matthews and Michael R. Henderson. It will be built in 48 months and will have a total height of 735 feet.

The complex was proposed and co-founded by Sandra G. Matthews and Michael R. Henderson. It will rise 735 feet (224 meters) when completed, and construction is expected to take 48 months. Furthermore, the project is worth $5 billion (AED18 billion).

Henderson said Moon Dubai is anticipated to boost the emirate’s economy once it is built. It will enhance various sectors such as entertainment, tourist attractions, technology, hospitality, and most importantly, space tourism.

According to Mathews and Henderson, Moon Dubai will be the largest and most successful modern tourism project in the MENA area, increasing the number of tourists visiting Dubai each year, as they stated that “it can comfortably accommodate 10 million annual visitors”.

An estimated 2.5 million visitors a year will be able to experience affordable space tourism in Dubai thanks to the complex’s lunar surface, which is surrounded by a “moon colony”.

The location is intended to be a hub for space exploration, giving space organizations a place to train their astronauts while also providing the luxuries of Earth in a lunar environment, as noted by Arabian Business.

The resort’s emphasis is on cutting-edge engineering, design, architecture and technology. The lunar resort will eventually serve as a training ground for astronauts from various space agencies.

In addition, Moon Dubai intends to include exclusive “Sky Villas”, which will be referred to as the private house on the moon, with opulent residences located internally within the main superstructure disc buildings.

MWR is expected to license Four Moon destination resorts (also known as regional licenses), one in each of the following regions: North America, Europe, the Middle East, North Africa and Asia.

With initial ambitions to develop satellites, the nation has committed $820 million to fund its ambitious space plans, according to Arabian Business.

Related article: Houseboats: Ocean builders design ‘luxury sea pods’ that look like something out of a sci-fi movie

This article is property of Tech Times

ⓒ 2022 TECHTIMES.com All rights reserved. Not to be reproduced without permission.

See also  Wisconsin tourism bounces back after pandemic, but it hasn't been a smooth recovery