* Henan Province is rich in cultural resources, with many ancient dynasties establishing their capitals here. It is home to sites of great historical interest, such as the Shaolin Temple and the Longmen Grottoes.

* “Young people now have a heightened sense of national pride and a deeper love for excellent traditional culture,” said Ma Xiaolin, director of the Henan Museum.

ZHENGZHOU, Sept. 10 (Xinhua) — As the morning sun spreads over Zhengzhou, capital of central China’s Henan Province, visitors begin to tour a new theatrical theme park here, a journey that takes them thousands of years ago to the rich history of the province. .

Welcome to “Unique Henan: Land of Dramas”, a gigantic immersive theater complex located on the outskirts of the city and covering more than 40 hectares. The site comprises 21 theaters with nearly 1,000 actors, presenting various shows themed on the history of Henan and the culture of the Yellow River, a “mother river” of the Chinese nation. 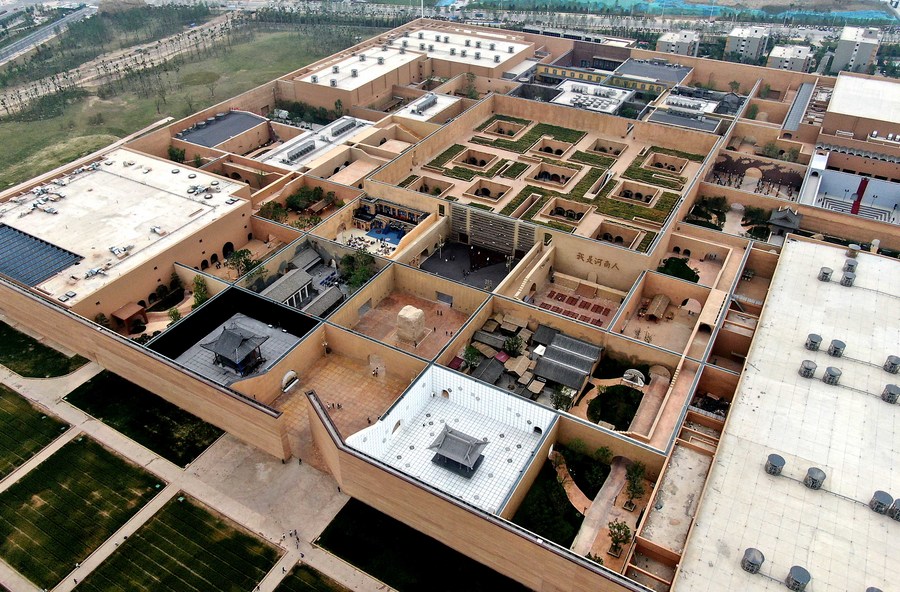 Since it opened last year, the attraction has become a huge success. “I think what I have seen is not so much a drama, but the rich history of Henan. This is a place that deserves many visits,” said a tourist named Wang Lin.

Henan is rich in cultural resources, with many ancient dynasties having established their capitals here. It is home to sites of great historical interest, such as the Shaolin Temple and the Longmen Grottoes. The popularity of excellent traditional culture shows its increasing charm in the minds of the Chinese.

The melody of “The Lonely Warrior,” a modern folk song, echoes through an international convention center in Zhengzhou. It is produced by nine ancient musical instruments, an innovation of the Henan Museum Huaxia Ancient Music Ensemble.

Since its establishment in 2000, the ensemble has restored and produced replicas of more than 300 musical artifacts, including a 5,000-year-old ceramic clay flute called a taoxun, 3,000-year-old bronze bells, and an ancient musical instrument. plucked string known as a konghou.

The team has collected and created more than 100 pieces of music based on old musical scores and literature. He has also tried broadcasting live performances on social media platforms to attract more audiences. 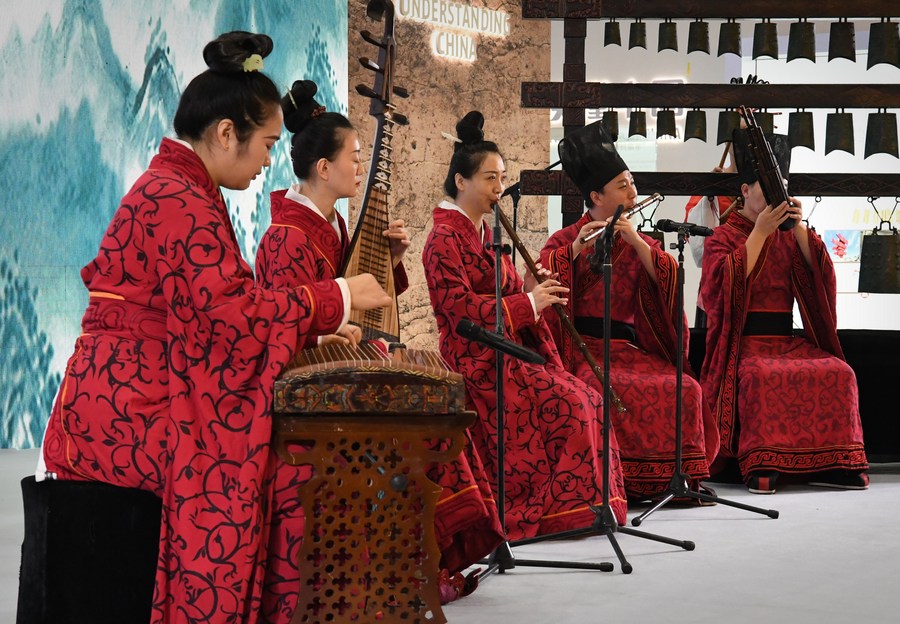 “Cultural relics are witnesses to history,” said Ma Xiaolin, director of the Henan Museum. “We want to bring the relics back to life so that visitors can hear the sounds of the past.”

Advanced technologies such as 3D reconstruction and augmented reality (AR) have been widely used to promote fine traditional culture. Last year, at the Henan Spring Festival gala, a dance performance called “Night Banquet at the Palace of the Tang Dynasty” brought ceramic figurines from the Tang Dynasty (618-907) back to life. It quickly went viral online.

Using 3D and AR technologies, the show combined virtual scenes with a real stage, bringing dance to a museum. It was viewed more than 2 billion times on various online platforms in 2021. The Sina Weibo microblogging site was abuzz with comments about the dance, with related topics generating 490 million views. 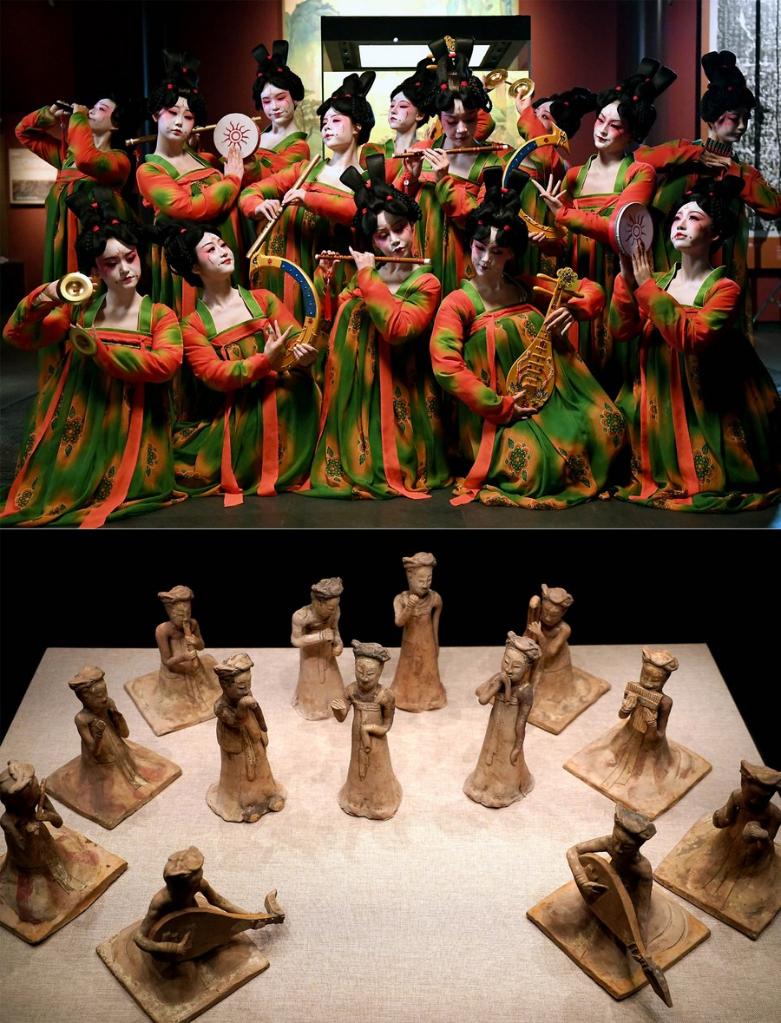 In this combination photo, the top taken on Feb. 20, 2021 shows the performers of the “Night Banquet at the Palace of the Tang Dynasty” during a video recording at the Henan Museum in Zhengzhou, Henan province, in the central China; the lower part taken on September 24, 2020 shows ceramic figurines displayed in the central pavilion of the Henan Museum. (Xinhua/Li An)

See also  What's New and Black on Netflix in December

The Henan Museum has been working to integrate creative ideas in the promotion of cultural relics. Sales of its “archaeological finds” blind boxes have exceeded 40 million yuan (about $5.8 million) since they were launched in late 2020.

“We combined the popular concept of blind boxes with cultural relics to let people experience the joy of physically excavating replicas of relics buried in the ground,” said Song Hua, director of the museum’s cultural and creative office. 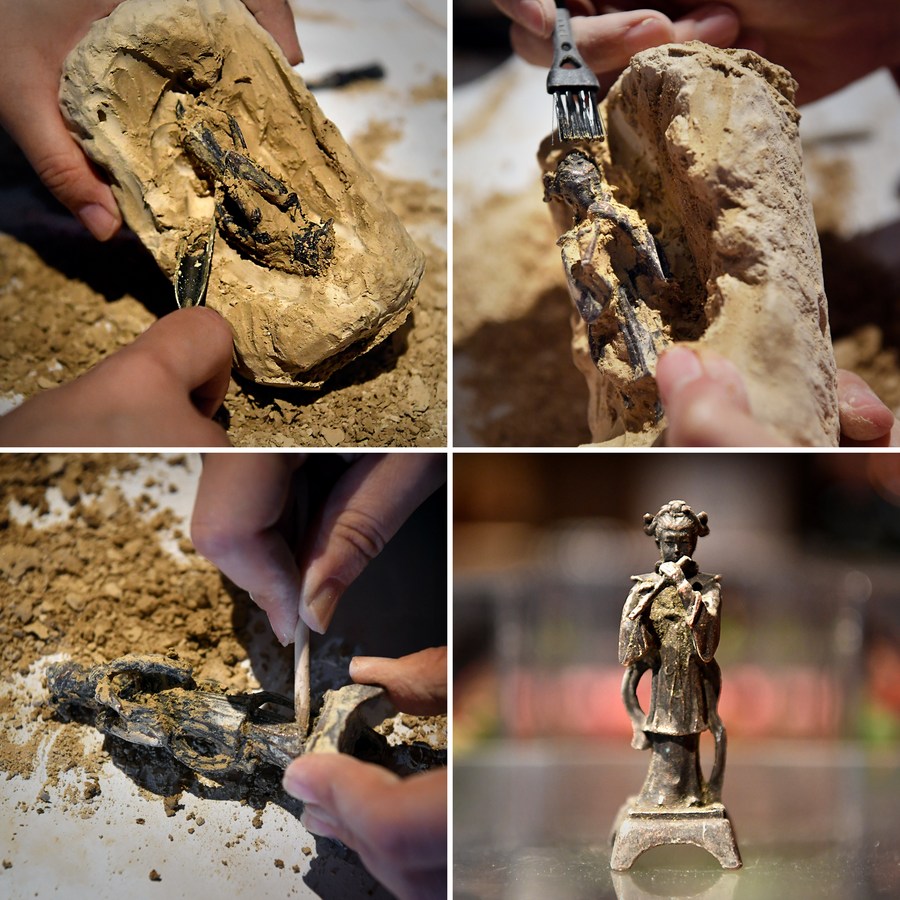 The combination photo taken on May 17, 2022 shows the process of a mimic excavation of “archaeological finds” hidden in a blind box at the Henan Museum in Zhengzhou, central China’s Henan Province. (Xinhua/Li An)

As more museums become cultural hubs, where creativity meets knowledge, taking a tour of them has become increasingly popular in Henan in recent years.

With the increasing popularity of traditional dress, historical and cultural audio-visual programs and archeology as a study option in higher education, there is a distinctly greater demand for fine traditional culture in today’s world, Ma said. “Young people now have a heightened sense of national pride and a deeper love for excellent traditional culture. ■