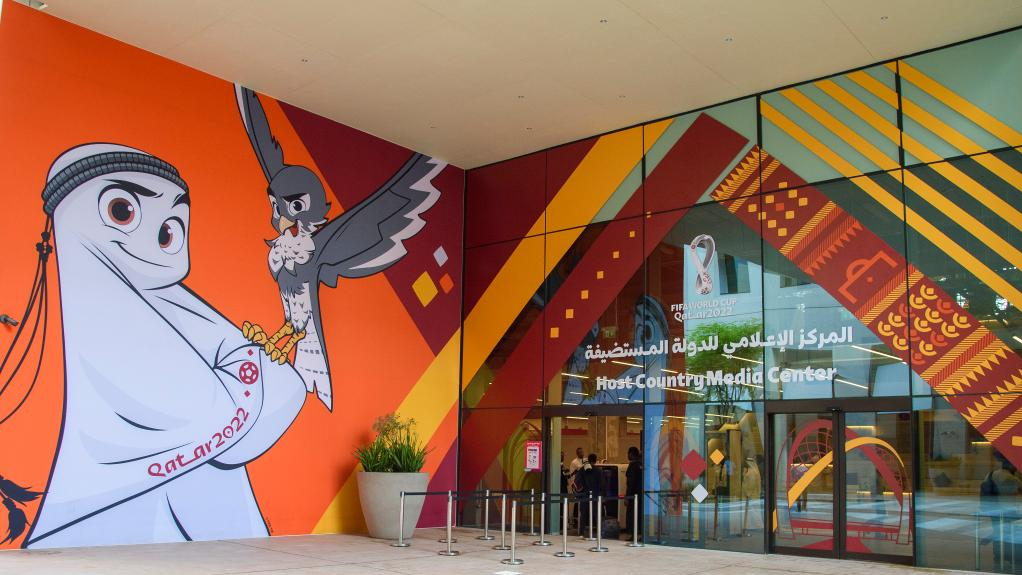 A view of the Host Country Press Center for the FIFA World Cup Qatar 2022 soccer tournament at the Msheireb Downtown in Doha, Qatar, on Nov. 3, 2022. /Xinhua

A view of the Host Country Press Center for the FIFA World Cup Qatar 2022 soccer tournament at the Msheireb Downtown in Doha, Qatar, on Nov. 3, 2022. /Xinhua

Editor’s note: Azhar Azam works for a private organization as a business and market analyst and writes on geopolitical issues and regional conflicts. The article reflects the views of the author and not necessarily those of CGTN.

Businesses in China play a crucial role in keeping domestic and international audiences engaged in sports. The country hosts a market of around 1.4 billion people. Sporting events such as the Sinopec Formula One Chinese Grand Prix that started in 2004, the 2019 INF World Cup have been held here, and the country hosted the Summer Olympics and Winter in 2008 and 2022.

The Chinese are also big soccer fans. According to estimates, China accounted for the second largest participation by an unqualified country in the 2018 FIFA World Cup Russia with each Chinese traveler spending around $7,500.

There is a rising middle class in China. In 2000, the Chinese middle class made up just 3 percent of its population. By 2018, the figure was over 50 percent at almost 707 million people. There are economic opportunities for the rest of the world, since China, before the pandemic, was the country that spent the most on global tourism.

China’s mobile, real estate and dairy giants, including Vivo, Wanda and Mengniu, sponsored the 2018 FIFA tournament, generating more than a third of the event’s $2.4 billion advertising revenue. In the 2022 FIFA World Cup Qatar, the Chinese team will not play, but the country’s conglomerates are the biggest sponsors, spending more than the world’s top brands. A London-based data analytics and consulting firm estimates that Chinese companies have amassed a whopping $1.4 billion compared to $1.1 billion for American companies.

Heavy spending by China-based companies helped expand soccer domestically and internationally. Furthermore, basketball and badminton are among the most popular sports in China. Soccer is not far behind. FIFA viewership data in 2018 showed the great interest of the Chinese and it was the largest territory for its global reach.

Qatar has invested more than $200 billion to build seven new stadiums, a new metro system, roads, a new airport, and other major infrastructure. China has been there all along.

The iconic Lusail Stadium was built by the China Railway Construction Corporation in a joint venture with a Qatari contractor, while it appears on a commemorative 22 Qatari riyal banknote. The stadium is the largest in the country and is expected to host 10 games, including the championship game. A solar farm, incorporating cooling systems to help players and spectators adapt to the local climate, supplying power from outside the city.

The construction of the Lusail Stadium deepened the China-Qatar relationship, boosting trade for the economy and infrastructure development, building on the leaders’ decision to develop ties in a strategic partnership after Emir Sheikh Tamim bin Hamad Al Thani of Qatar will visit Beijing in 2014. Bilateral relations continue to witness significant development as Doha has strengthened the strategic relationship through cooperation, including in energy, reservoirs, ports, and wireless communication networks.

An estimated 1,500 projects, including 888 electric buses, souvenirs and the Al-Kharsaahsolar solar power plant, represent China and complement Qatar’s commitment to deliver a “green World Cup.” Laee’b, which means super-skilled player in Arabic and the official mascot of the Qatar 2022 FIFA World Cup, was mass-produced in the Chinese city of Dongguan. Beijing also gifted two giant pandas to Doha.

The diplomatic blockade of Asian states has intensified since Joe Biden took office as president of the United States. Some Western countries did not exclude sports and agreed to the US-led diplomatic boycott of the Beijing 2022 Winter Olympics. Since the “hypocritical West” applies the same strategy regarding Qatar, this prejudice must be combated.

From Afghanistan and Iraq to Syria and Libya, the US has led wars or planned riots in the Middle East and North Africa. As it meddles politically in the region along Asia-Pacific lines, China will continue to support Qatar and other Gulf allies to prevent this epic Arab moment from going to waste. The 27-year “longest” deal in the history of the liquefied natural gas industry between the two countries will enhance Beijing-Doha ties and bring bilateral relations to a long-term strategic partnership.