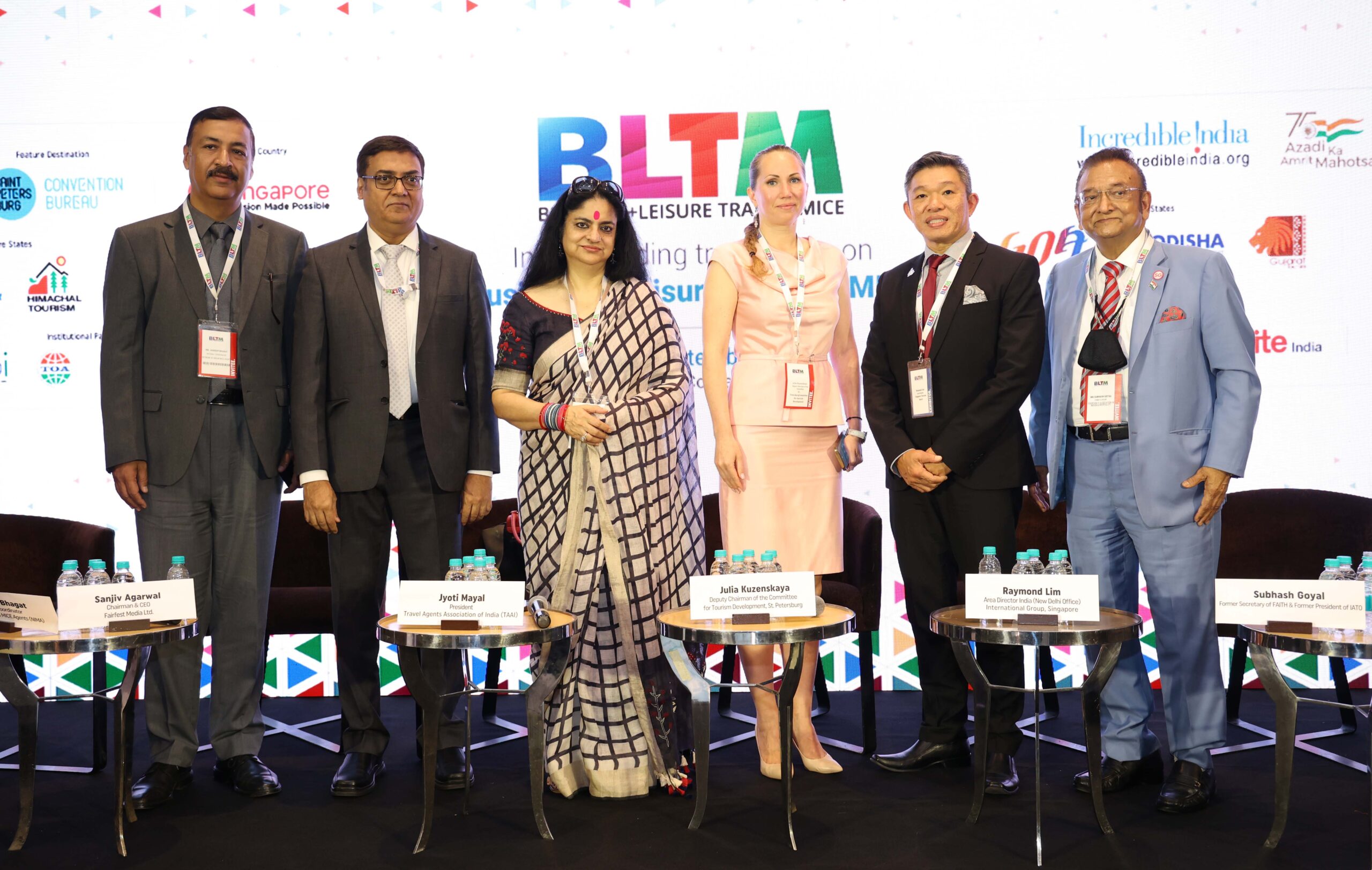 The 2-day show is starring in a post-pandemic uptick of the business, leisure and MICE travel segment, with over 100 exhibitors from 4 countries and over 13 Indian states and UTs.

Catering to the huge post-pandemic opportunity India presents, the show gives you unprecedented access to the cream of the North Indian market buyers and the advantage of hosted buyers, specifically chosen from the Business travel segments. +Leisure and MICE.

Over 275 invited buyers will be present at the show, specifically chosen from the Business + Leisure and MICE travel segments across India. More than 1,500 trade buyers are expected to visit the fair.

The show is driving the industry forward with its exquisite display of unique destinations like St Petersburg, Singapore, Moscow and India Tourism and some of the leading states, hotels, resorts, tour operators, DMCs etc. from India, on a 5-star show stage, in the heart of Delhi at the Leela Ambience Convention Hotel, where participants can engage in fruitful meetings in an intimate setting.

As global travel resumes, most destinations are banking on a faster revival of MICE and bleisure tourism in 2022; and It should be noted that according to surveys, India’s outbound MICE tourism market is expected to reach US$9 billion by 2025.

India’s business travel market is reportedly forecast to be worth US$55.2 billion by 2027, exhibiting a CAGR of 8.1% during 2022-2027, mainly due to globalization of operations commercial. In addition, the growing trend of leisure travel, the development of the meetings, incentives, conferences and events (MICE) segment, the rapid digitization, the growing partnership between companies and airlines, the continuous improvements in the airline, hospitality and tourism are also having a positive influence. the market throughout India.

BLTM opens the doors to India 6.5 million outbound business and MICE tourists, as well as the fastest growing business travel market in the world.

St. Petersburg, Russia is he Feature Target of the Show; weather Singapore is he featured country. Goa, Odisha and Gujarat are showing the best of themselves partner statesY Uttarakhand and Himachal Pradesh are participating as Feature States. Private sector participants from all over India, from many states are also present at the fair.

Most of the states are participating with delegations of tour operators and hoteliers; a clear appreciation of the relentless spirit of India’s business, leisure and MICE travellers, who continued to visit these destinations during the pandemic as they remained open with the necessary precautions.

Indian Tourism also has a key presence in the fair, showcasing all its campaigns and programs such as ‘Azaadi Ka Amrit Mahotsav’, ‘Dekho Apna Desh’, ‘Ek Bharat Shreshtha Bharat’.

The fair is reserved for travel trade visitors on both days, ie 10 and 11 September, from 10 am to 6 pm.

BLTM will be followed next week by OTM, the leading travel trade fair in Asia-Pacific, which will be organized on September 13, 14 and 15, 2022, at the Jio World Convention. Center, Mumbai. OTM promises to be the highest level of travel shows ever seen in India.

Highlighting the growth of the MICE industry Ms. Jyoti Mayal, President, Travel Agents Association of India (TAAI) said, We have recovered, restructured, resurrected and overcome the crisis that hit us 3 years ago. Every aspect of tourism is important and India has witnessed the biggest increase. Tourism is forecast to see a year-on-year growth of 5.8% although the country will grow at a rate of 2.7%. We will also witness 126 million more jobs in the next decade. The MICE sector in India has been pegged at INR 25,000 crore, growing 8%. Commitment to proper and effective collaborations between government and private stakeholders to have well-defined policies, support, funds and skilled labor will make both business and MICE a success story. We are grateful to the BLTM organizers for giving us the platform to define a roadmap for this industry.

Emphasizing the strengthening of the Indo-Soviet relationship Mr. Subhash Goyal, former Secretary of the Federation of Indian Tourism and Hospitality Associations (FAITH) and former President of IATO, said, Outbound tourism from India in 2019 was about 25 million and domestic tourism within India, people traveling by air was about 300 million. India has immense potential and Indians are one of the biggest spenders. Today there is a waiting list for the UK, the US and other countries for 6 months or a year, which is the opportunity for Russia and India to strengthen the Indo-Soviet relationship. I am delighted to use BLTM as a platform to share my point of view that if Russia does these 3 things, in the next 2 years more than a million tourists from India will travel to Russia. an air bridge: Russian airlines will be included in the list of India.

“BLTM has always proven to be beneficial and crucial to the Bleisure and MICE travel industry, and with Delhi being the national capital, it is but the obvious choice for us to host this show, year after year. During this post-pandemic phase, when the Bleisure and MICE market is exploding, a show like BLTM is the absolute necessity of the moment to keep the momentum going and provide the boost the industry requires,” he said. Sanjiv Agarwal, Chairman and CEO, Fairfest Media Ltd., the organizers of BLTM. “BLTM, which is India’s leading trade show for Business + Leisure Travel and MICE, has received exceptional support from the wider travel industry and our association partners who have been instrumental in reviving travel and the sightseeing.he added.