destinations in Thailand they are always worth the time and interest because they are full of amazing stories or different traditions. With its innate natural beauty, such a country must have an impressive story behind it. Learn about what this ancient kingdom was and what it has become today by touring these places.

Also read: Digital nomads can apply for a 10-year visa to Thailand from September 2022

Tourist places in Thailand that highlight its history 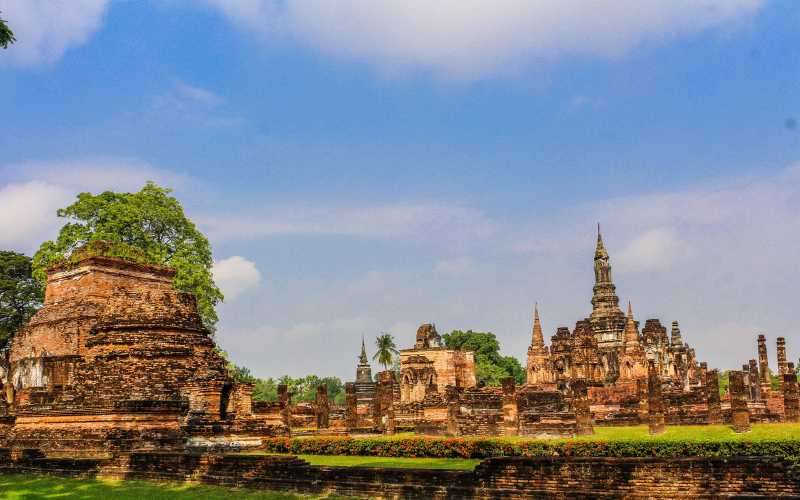 The ancient ruins found inside. Sukhothai Historical Park they are a sight to behold. The park has so many historical sites that it will almost take a day to fully explore it with a bicycle or electric buggy. But every remnant in this park is a story waiting to be told. 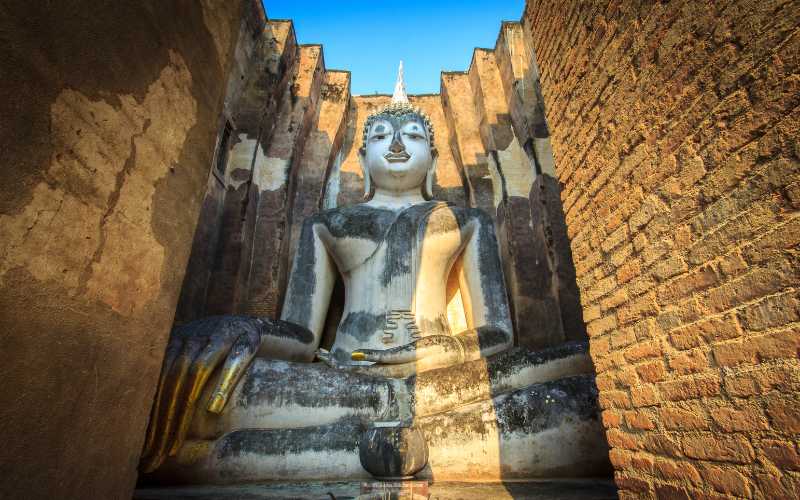 If there is a stupa (a Buddhist burial place) that you must visit within this World Heritage Park, it is wat maha that. Translated as the Temple of the Great Relic, it houses numerous artifacts relevant to Buddhist tradition and practice. For this reason, the stupa is the most important site during Sukhothai’s time as the capital of Thailand. It also exhibits the best examples of Sukhothai’s architectural arts, such as the mandala design, the lotus bud shape, and Buddha sculptures around its base. 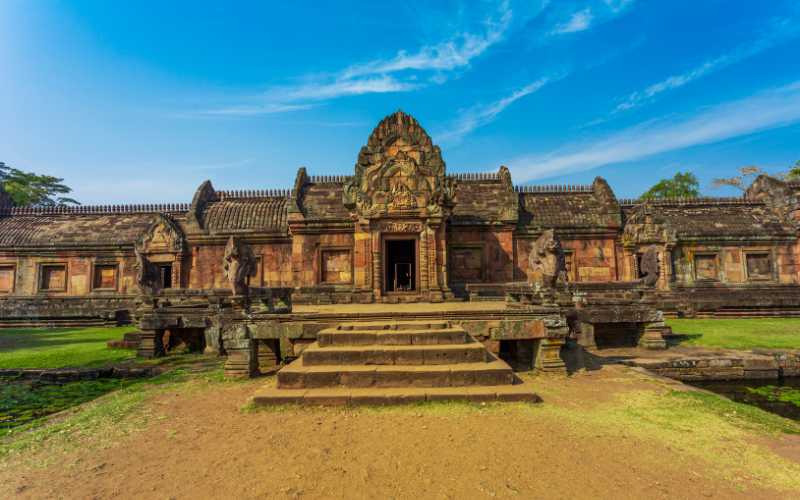 For an exciting and enriching look at Thai culture, you can visit ghost rung. This World Heritage site is one of the most popular places to visit in Thailand due to its unique geological location. This entire complex of Hindu temples sits on the edge of a now extinct volcano in Buriram Province for more than a millennium. 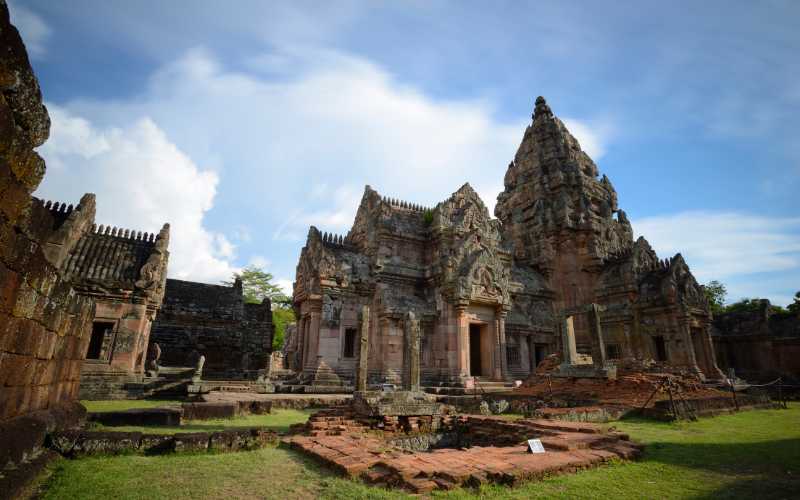 Phanom Rung symbolizes the abode of the Hindu god Shiva, Mount Kailash. As well as being an important place of worship, the complex had buildings with many different functions. There are a couple of libraries, a medical center and a shelter for travelers who wish to spend the night within the complex. It even had a Royal Changing Pavilion for outfit changes during important rituals. This proves that Phanom Rung had an important function in the communities in and around it.

Be sure not to miss the Phra Narai Lintela priceless piece of art depicting a reclining Hindu god Vishnu. 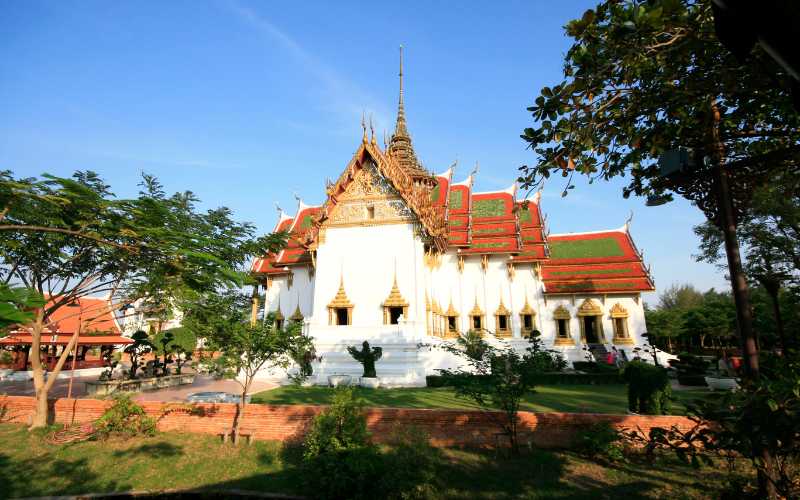 ancient siamese It is the brainchild of Lek Viriyaphant, a Thai millionaire who had a keen interest in collecting art. Over time, he also developed an interest in creating a space to produce replicas of ancient sites or completely restore them. He originally wanted to create a golf course to showcase these restorations, but he changed his plans to something more educational as the property developed. 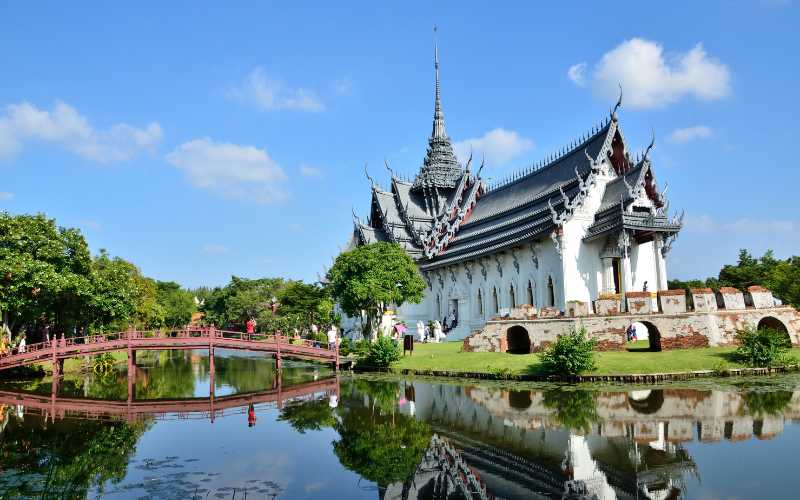 Today, it is the largest open-air museum in the world and one of the best places to visit in Thailand to learn about its history. It also has the shape of the country itself!

The museum has replicas showing prehistoric architecture throughout Thailand to the present. Some examples are a replica of The Palace of the Tiger King of Phetchaburi and a restoration of wat chong kham. Ancient Siam works closely with a team of experts from the National Museum of Thailand to help preserve the history and culture of Thailand.

4. The Bridge on the River Kwai

Thailand prides itself on resisting colonization by other nations. While this is true, it does not mean that Thailand did not suffer from the atrocities of World War II. the world famous Bridge over the River Kwai it serves as a memorial to remember the devastation.

Originally intended to be part of the Burma Railwaythis bridge was built by a combination of Dutch and British prisoners of war captured by Japan in 1942. Japan occupied Kanchanaburi by then, but the supply line did not end in time. The brutal working conditions of the Imperial Japanese Army caused the death of many prisoners of war during its construction.

Although technically known as bridge 277It is popularly known as The Bridge on the River Kwai due to the French novel and hollywood movie adaptation. If you ever read or watch both media, please be aware that the events depicted in them are highly fictional. 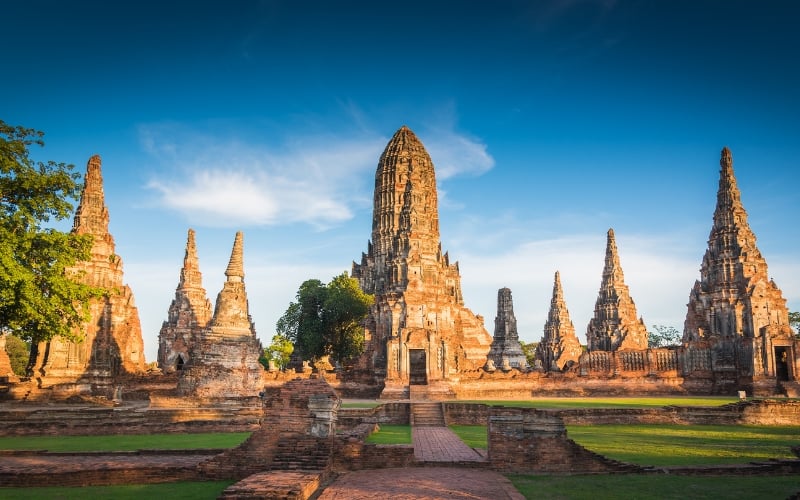 Thailand’s second capital also prospered during its time, as evidenced by the extensive ruins of Ayutthaya Historical Park. Ayutthaya was an incredibly busy city during its time as the capital of Siam from 1378 to 1767. Some evidence even suggests that Ayutthaya was linked to the rest of Asia, Arabia, and even Europe. It remains one of the most visited destinations in Thailand, not only by tourists, but also by locals.

To this day, it is still considered one of the holiest places to visit in Thailand. the temple of wat maha that, in particular, it is sacred as it serves as the site of the country’s first Buddhist university. There are still some monks here who offer to teach tourists how to meditate properly.

Also read: These are the new UNESCO World Heritage Sites for 2021

Places to visit in Thailand to immerse yourself in culture 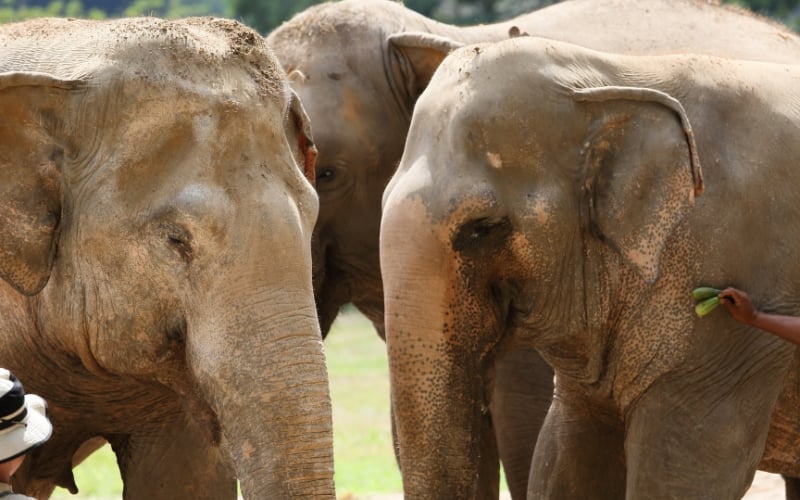 The Thais have an almost unshakeable affinity for elephants. These majestic animals have lent their strength to the country, from the wars it has waged, to its development as a nation. Over time, unfortunately, their population has been exploited for tourism, while logging threatens their natural habitats. This is why The Elephant Jungle Sanctuary is dedicated to the preservation of Indian elephants, which are subspecies of Asian elephants in Thailand. He also wants to raise awareness about preventing activities that may harm elephants in the future.

The Elephant Jungle Sanctuary has many sites throughout Thailand, but its main location is in chiang mai. Visitors can book tours to enjoy the company of these gentle giants while learning about elephant conservation practices. If you want to observe ethics during your travel, this is one of the best destinations in Thailand to visit.

Also read: 9 ethical animal sanctuaries you can visit in Thailand

Muay Thai may be elegant to look at, but it is definitely not for the squeamish. Still, there is no denying that “the art of eight limbs” is an important part of Thai culture and history. His role in ancient festivals provided entertainment for royalty and peasants alike. Its practical use also meant that soldiers in the army had to learn it.

Today, it is an exciting sport that attracts locals and travelers alike. Prestigious fights are often held in New Lumpinee Stadium in bangkok. Originally built in 1956, it is a revised iteration of the old stadium and attracts numerous combat sports enthusiasts.

The Royal Thai Army is in charge of running this prolific stadium, which hosts matches three times a week. If you’re just looking for some intense flying knees and elbows, New Lumpinee Stadium only has room for the most exciting fights. 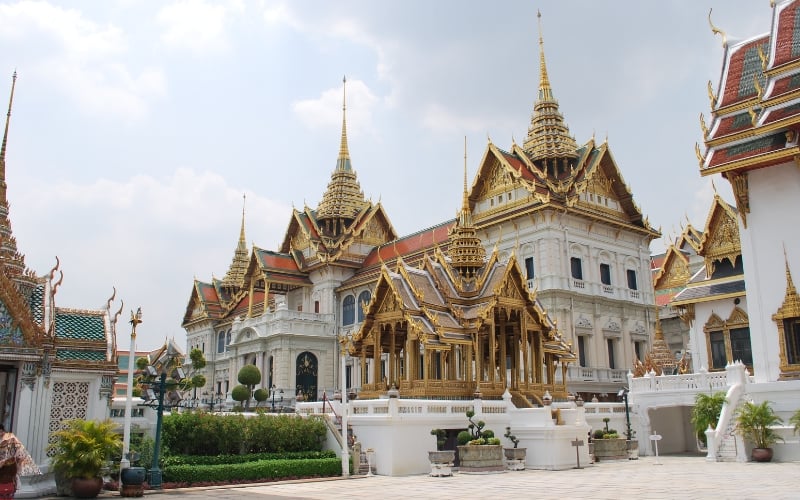 Situated right in the heart of Bangkok, no visit to Thailand would be complete without going to the great palace. This complex of buildings has multiple functions, but is most famous as the residence of the royal family since the city became the capital of Thailand. Some structures serve as administrative offices or ceremonial rooms for rituals. The palace complex also serves as accommodation for personalities, ambassadors and foreign dignitaries. 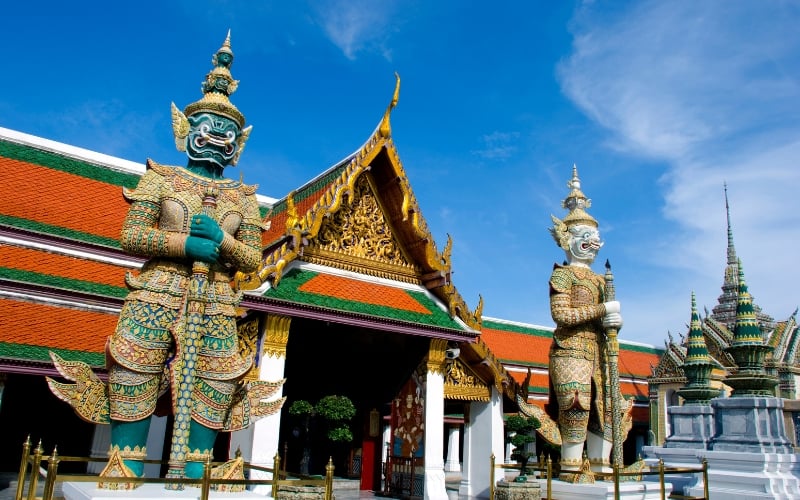 To really understand the importance of the Grand Palace, it may be worth booking a day tour. The complex has dedicated rooms that specify their functions. Given its large size, average travel times can take up to half a day for a comprehensive Explanation of the structures. But make no mistake, everything your eyes will see in the Grand Palace is breathtakingly beautiful, from the architecture to the art you’ll see inside its rooms.

Considered one of the most important archaeological sites in Southeast Asia, Ban Chiang It has always fascinated historians even before it became a tourist spot in Thailand. It has been widely theorized that this site was a cultural center of a prehistoric civilization, thousands of years before Siam and Thailand were even a possibility.

The historic site had evidence of advanced metallurgy. Iron and bronze cast tools from the site were found to be at least 4,000 years old. Apart from the metal work, various red pots were also unearthed. Historians suggest that the ancient civilization residing in Ban Chiang used these vessels for cultural and social exchanges with other civilizations.

Some of these vessels were looted by locals due to their value. Some artifacts have been recovered, which people can see in the Ban Chiang National Museum. 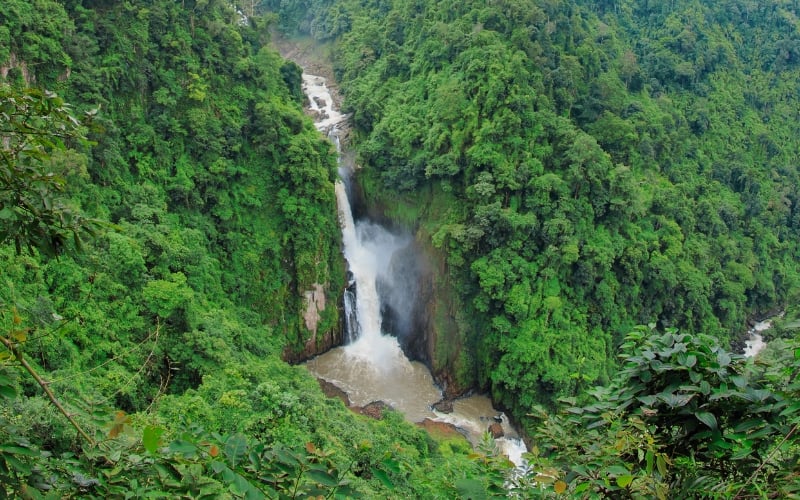 There is no shortage of beautiful waterfalls in Khao Yai National Park, all of which are easily accessible. the tallest is Haew Narok Waterfallwith an extension of 150 m. Pha Kluai Mai WaterfallBesides being a sight to behold, it is also famous for the orchids that surround it. Finally, while the basin of Haew Su Wat Waterfall it’s great for swimming, local authorities prohibit the activity due to rough flood waters.

There are still so many activities that travelers can do when they go to tourist places in Thailand. Each of them will help you get to know Thailand a little better. But for a trip that aims to provide more context behind its culture and history, here are some of the best places to visit in Thailand.